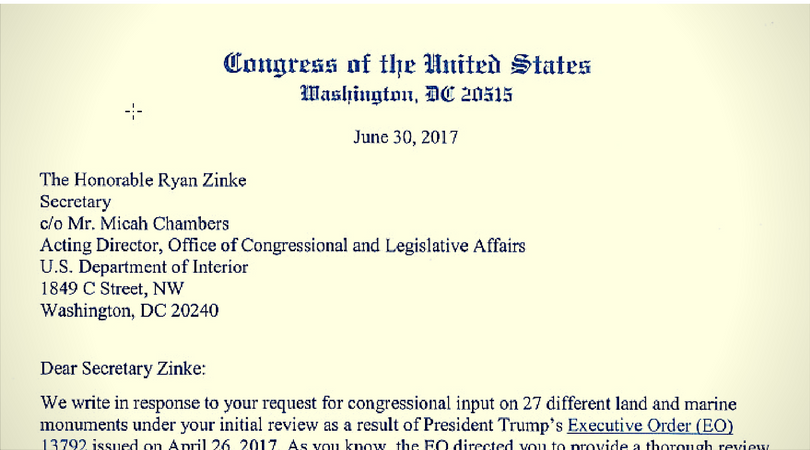 What the Congressional Western Caucus letter got wrong

The Congressional Western Caucus was created about 20 years ago by Republican Representatives in western states, but now has members from across the U.S.  A good number of the members have a long-standing reputation for being against wilderness designations, national monument designations, and other measures to protect places with important ecological, cultural, historical, or other values, such as Utah Representatives Rob Bishop and recently retired Jason Chaffetz.

Berryessa-Snow Mountain:  The letter recommended that Berryessa-Snow Mountain be rescinded, mostly because local stakeholders were opposed to the national monument and it was pushed by “extreme special-interest groups”. The letter failed to acknowledge that the monument designation had the support of five counties, many cities, about 200 businesses, 60 elected officials, ranchers, farmers, user groups including mountain bikers, off-road enthusiasts, hunters, anglers, scientists, newspapers, tribes, and more. The letter also failed to note that the Obama administration excluded all controversial areas from the monument in response to stakeholder concerns.

The letter also completely ignored basic geology. The monument is located on the opposite side of the San Andreas Fault from where oil has been found in great abundance for many years. All attempts at finding oil on the side where the monument is located has never produced any viable results.

Mojave Trails:  The letter claimed that several mineral leases were negatively impacted by the designation. However, the national monument proclamation explicitly said the “establishment of the monument was subject to valid existing rights” which means that valid mining claims within the monument boundaries that existed at the time of the designation remained valid.

San Gabriel Mountains:  The letter claimed that one of the reasons this national monument should be reduced in size is because local stakeholders in San Bernardino County opposed the current boundaries, including San Bernardino County Supervisor, Janice Rutherford, and the owner of the Mt. Baldy Ski Lift. The letter failed to mention the extraordinary amount of local stakeholder support for the monument’s designation, especially in Los Angeles County in which about 99 percent of the monument is situated.  In addition, both Supervisor Rutherford and the Mt. Baldy Ski Lift owner are members of a group that submitted a monument review comment letter dated May 25, 2017 that supported the San Gabriel Mountains National Monument’s existence and its current boundaries.

The three California members of the Western Caucus who signed onto this letter were Paul Cook (8th District), Doug LaMalfa (1st District) and Tom McClintock (4th District). Take action here to remind them that they work for us!