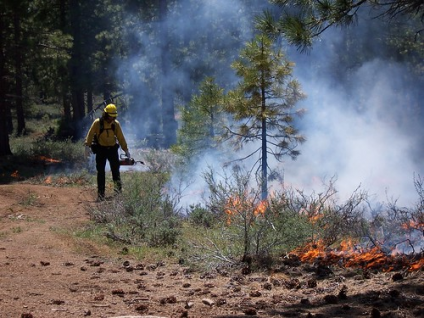 This month, U.S. Forest Service Chief Randy Moore announced a pause in all prescribed fire operations while they conduct a 90-day review of protocols, decision-making tools and practices. This decision was taken after a prescribed fire escaped its containment lines, creating the Hermits Peak Fire which eventually joined the Calf Canyon Fire to create the largest fire in New Mexico history. (SOURCE)

Currently, the Forest Service is conducting a review of the plan for the prescribed fire to determine if mistakes were made. As part of his announcement, Chief Moore highlighted that 99.84% of prescribed fires go as planned. He also noted the importance of prescribed fire as a tool for reducing the threat of extreme fire by dealing with the excess fuels.

While the order didn’t explicitly call out the New Mexico fire, it was clearly made in response to the political pressure the Forest Service was receiving. The situation is eerily similar to an order in response to the Tamarack Fire in 2021.

The Forest Service didn’t immediately approach the Tamarack Fire with a full suppression approach; instead, they chose to safely monitor the wildfire. Initially, the fire was in a remote part of the Humboldt-Toiyabe National Forest, so it posed no immediate threat to the public or other values. At the time the first started, the Forest Service firefighting resources were stretched thin by multiple large fires. There was also a determination that a full suppression approach would likely have put firefighters in harm’s way if the weather changed and extraction would have proven very difficult. Then, a change in the weather (i.e., strong winds and very dry conditions) created an explosion of the fire. The approach was then shifted to full suppression.

The popular understanding of what occurred, often mistakenly repeated by politicians of all stripes, was that the Forest Service adopted a “wait and see approach” policy. Even more distortionary were those who repeatedly characterized it as a “let it burn” policy. The implication was that it was the Forest Service choosing resource benefits over suppression. The repeated use of this “let it burn” phrasing distorts both the extensive planning and monitoring of these fires, and makes the Forest Service seem callous to the potential human impacts of fires.

The Forest Service must consider many factors when deciding an approach to a certain fire or choosing a window for a prescribed burn. The reality is that the Forest Service is put in an impossible spot.  We HAVE to get more fire on the ground to both restore the health of our forested landscapes and increase fire resiliency, and we are not capable of controlling all fires at all times. The pauses may be effective tools to relieving political pressure. They may also make it more likely that we can save these tools for future use by demonstrating that the Forest Service is taking preparation and process extremely seriously. But the reality is we have to also take on more risk and there will be times that they make mistakes.

The problem with blanket prohibitions is that they don’t consider local conditions which should be dictating policy. For example, prescribed burns being planned in far northern part of California should not be cancelled because of weather conditions in New Mexico. Ultimately, we need to change our relationship to fire and the more we rely on old narratives of suppression and a perception of no risk. If we don’t we will make our future fires much worse.

All stories by: CalWild
Biden’s Executive Order on Old Growth Forests
The latest on NCIP