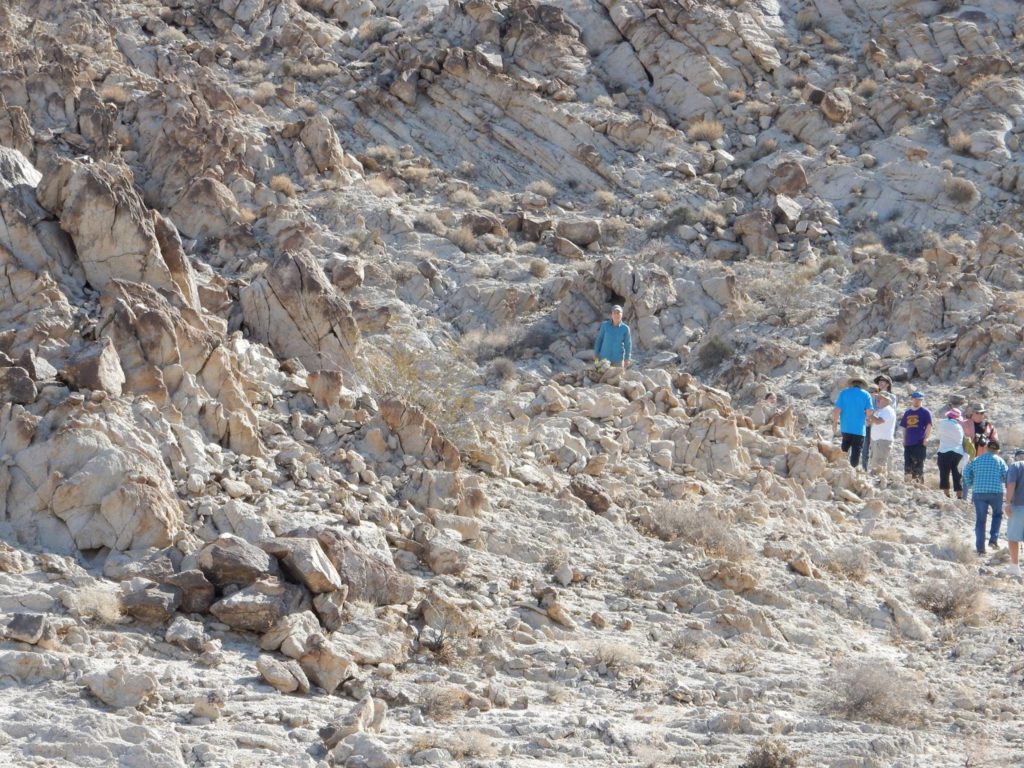 CalWild, together with our partners, Bureau of Land Management (Needles Field Office), and Mojave Desert Land Trust (MDLT), recently provided our last 2017 interpretive tour of Camp Iron Mountain. This place was one of about a dozen camps that General George Patton established in the California and Arizona deserts to train American troops for battle in the North African desert in World War II. The area that encompassed the camps was called the Desert Training Center (DTC). More than one million troops were trained in the DTC from 1942 through 1944.

Our group gathered in the morning at MDLT’s office in Joshua Tree. The tour participants signed in near a poster with photographs that had been taken in the DTC. After answering questions of the curious participants and reminding them of important desert safety issues, we headed out in a caravan. As we drove along Highway 62 toward the camp, I began to give a few details about what the day would hold to those riding in my vehicle. We soon left the towns of Joshua Tree and 29 Palms behind us and began to see the wide-open desert and the craggy rocks of the Sheep Hole Mountains in the Sheephole Valley Wilderness. The clear morning also provided a long-distance view into the tranquil Cadiz Valley. Finally, it was time to turn off of the highway and onto the dirt road that would take us to Camp Iron Mountain. 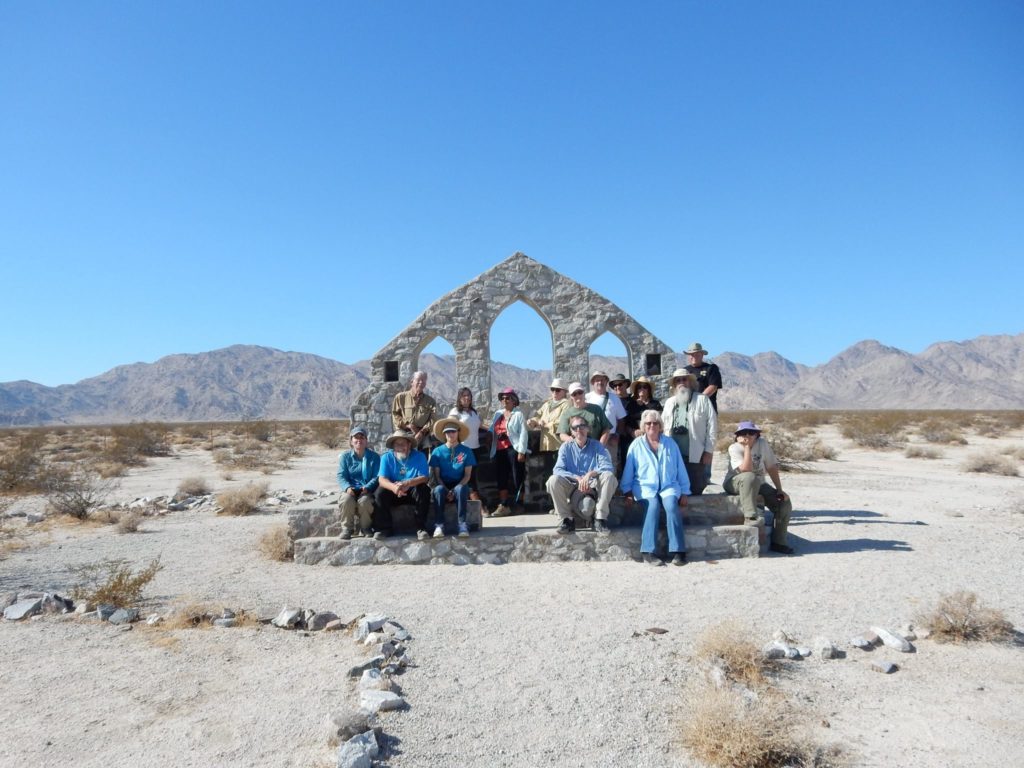 Before we reached the fenced-in portion of the camp, we stopped along the way to inspect a rock wall that had apparently been built as part of troop maneuvers. At this first stop, the BLM archaeologist provided to the tour participants, background history of our country’s entry and involvement in WWII and the use of the DTC. 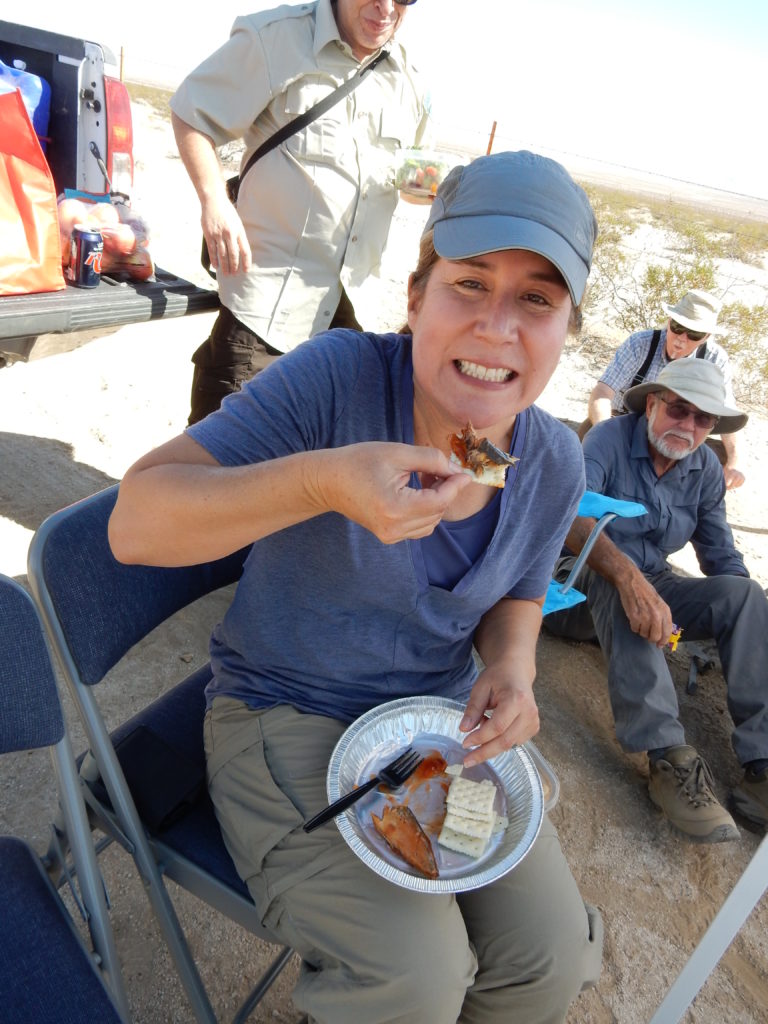 As we turned off of the main dirt road and toward the fenced-in portion of the camp, we left a fairly well-maintained road and entered a very sandy trail. We parked at the fence boundary. Some of the tour participants hiked to the altar located east of the fence entrance while the BLM archaeologist provided more information about the DTC and the religious services that were held there for the troops. I also read first-hand accounts from soldiers who trained at the DTC, providing the tour participants with detailed descriptions of daily life in the camp and desert.

When we hiked back to our parking location, awnings, tables, and chairs had been set up for the group. I read more personal accounts from the soldiers about the food they had eaten while at the camp and while on maneuvers. The tour participants then were given the opportunity to sample many of those food items including Spam, “desert trout” (aka sardines in tomato sauce), Fig Newtons, and lemon drops which the troops would carry in their pockets and suck on during the day to help quench their thirst in the heat of the desert sun.

After learning about and experiencing the soldiers’ typical fare, I read a few comical tales of camp life to the group. Everyone laughed and marveled at the fact that the soldiers could have fond and amusing memories from their time at the DTC, notwithstanding its harsh and unforgiving setting.

Finally, we drove to the western edge of the fenced-portion of the camp and made the short walk to the “Catholic” altar. While we do not know of anything that confirms that this altar was used by those of this faith, though photos exist of this altar with a priest standing next to it, so the BLM archaeologist refers to it as such. This altar is in better condition than the first one that we visited and still has a rock cross on the altar. We took a group photograph at this altar and ended our tour.

On the drive back to Joshua Tree, I enjoyed lively conversation with the tour participants riding in my vehicle. They all said that they had thoroughly enjoyed the tour and learning about an important part of our history, and added that the immersive experience that was created by the reading of the first-hand accounts and the food tasting made the tour all the more enjoyable.

All stories by: CalWild
Stuck on (and in) the Sanhedrin Tract
Owl Canyon