2021 UPDATE: Battery Mineral Resources California, Inc. completed its exploratory drilling in 2020. They later announced that additional exploratory drilling was being put on hold due to financial issues. The parent company of a new project proponent, IG Lithium, LLC, issued a press release on November 15, 2021, announcing that it has taken over the rights to the project. If this new proponent is desirous of conducting any additional exploratory drilling, they will need to prepare a new proposed Plan of Operations and submit it to the BLM. CalWild and our partners will continue to monitor this potential project and will keep our members informed of any important development.

ORIGINAL POST: The Panamint Valley is a vast scenic depression located between China Lake Naval Air Weapons Station (NAWS) on the south, the dramatic Argus Range on the west, and the often snow-capped Panamint Range and Death Valley National Park on the east. It is located relatively close to other projects that we oppose in this part of the California desert, including the mining threat to Conglomerate Mesa (also in our Top 5 Threats) and proposed geothermal development and pumped storage in the Haiwee Reservoir area (near Highway 395 and Olancha). The Panamint Valley is part of the traditional homelands of the Newe (Western Shoshone) and Numu (Northern Paiute) Tribes. Local tribes, such as the Timbisha Shoshone Tribe of Death Valley, continue to value the area and engage in traditional uses there.  Panamint Lake has many sites which are eligible for listing on the National Register of Historic Places as districts, trail systems, or individual sites. The entire Valley is well preserved from development and may constitute a nationally significant cultural landscape.

The Valley is home to many species, including the iconic desert bighorn sheep, the threatened western snowy plover (also a California Department of Fish and Wildlife Species of Special Concern) and rare plants such as the polished blazing star and Death Valley sandpaper-plant. The area contains unique desert wetland communities including mesquite bosques and freshwater and saltwater marshes. Fairy shrimp occur in Panamint Lake, which is the remains of a Pleistocene lake that was originally 700 feet deep. The Lake encompasses two major springs, Warm Sulphur Springs and Post Office Springs.

The Valley is threatened by a potential lithium mine. On August 9, 2019, the Bureau of Land Management (BLM), approved a drilling project that authorized Battery Mineral Resources California, Inc., a subsidiary of an Australian mining company, to drill four 3-inch diameter wells to 2,000 feet deep on or immediately adjacent to the Panamint Dry Lake playa to look for lithium.  BLM found that the exploratory drilling would not have any significant environmental impacts, despite many concerns raised by CalWild and other conservation groups. The mining company completed that drilling project, but has now submitted another proposal for a seven-drill hole program. The BLM Ridgecrest Field Office will likely issue a new Environmental Assessment for public comment in early 2021 on the second drilling proposal.

In June 2019, the Trump Administration released, “A Federal Strategy to Ensure a Reliable Supply of Critical Minerals.” This Executive Order directs the U.S. Department of the Interior (DOI) to locate domestic supplies of the minerals on a “critical minerals” list, ensure access to information necessary for the study and production of these minerals, and expedite permitting for mineral projects. Since lithium is on this “critical minerals” list, it is not surprising that the BLM approved the initial drilling project. If enough lithium is found by the mining company to make an actual mine economically feasible, that will likely be the next step. At this time, it is unclear if or when the Biden administration will rescind this Executive Order. It is hoped that the new administration will move quickly to rescind this Executive Order and that BLM will no longer be under pressure to expedite and approve an industrial scale lithium brine mining operation. Given the very large size of the mining claim that the company holds (about 60 square miles), the potential enormity of the mining operation is breathtakingly frightening. An aerial photo of an existing lithium mine in Nevada gives some insight into what could happen to the Panamint Valley. 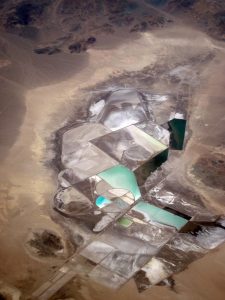 Aerial view of a Nevada lithium mine

While lithium is needed for today’s battery technology, one does not know how long this will be true, but the impacts from a mine on the fragile desert environment will last numerous lifetimes, if not longer. The mining process could affect local water supplies, potentially poisoning communities. Chemical leakage is a major concern when it comes to lithium mining. The lithium carbonate extraction process harms the soil, and can cause air pollution. Not only will the mine be an enormous ugly combination of pits and brine-filled water pools, it will rely on scarce desert ground water, likely negatively impacting the springs in the area such as Warm Sulphur Spring.

The first set of drill sites were located in roadless areas that either BLM and/or CalWild previously identified to have wilderness characteristics. BLM previously acknowledged that one of the roadless areas had several reported prehistoric sites and that the other roadless area was an “important wildlife corridor for Nelson’s desert bighorn sheep and other upland species to move without disruption or interference across Panamint Valley between mountainous areas on NAWS lands, in the Slates, Panamints and Argus Ranges”. The first set of drilling locations was also located in California Desert National Conservation Lands and the Panamint Lake Area of Critical Environmental Concern, due to the nationally significant ecological and cultural values of the area.  We do not yet know where the second set of drill sites will be proposed, but we suspect it will be relatively close to the first set.

CalWild will be encouraging the Biden administration to spare wild lands like the Panamint Valley from development, especially given that there are more promising deposits of lithium elsewhere that could potentially be mined with less impact such as near the Salton Sea.