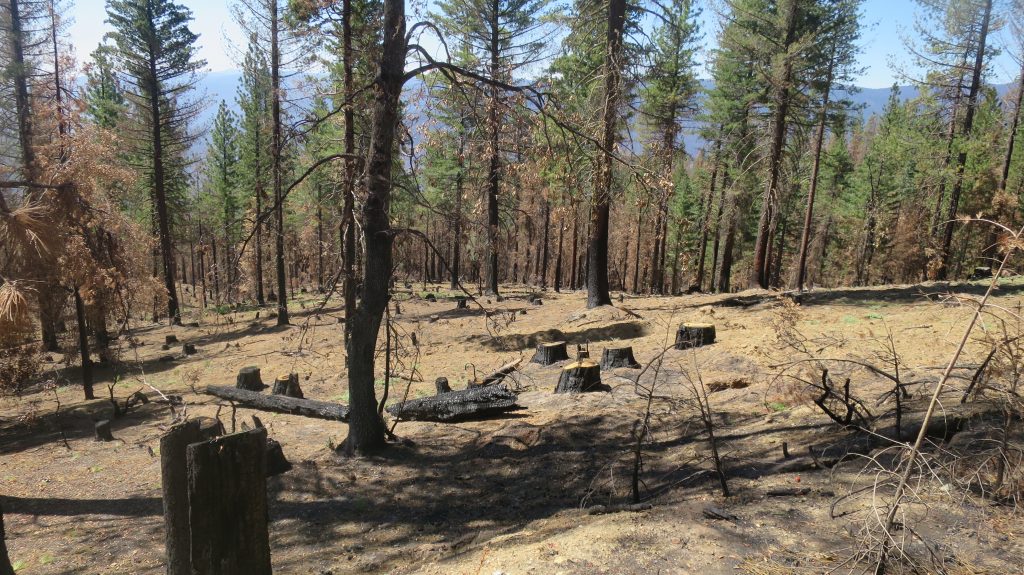 The Forest Service is proposing a massive “Post-Disturbance Hazardous Tree Management” program that would clear dead, dying, and damaged trees along hundreds of miles of roads and trails on nine National Forest in California. The program “…includes hazard tree felling and removal, as well as removal of downed woody fuels resulting from hazard trees (slash), to reduce public safety hazards along portions of roads, trails, and near facilities (campgrounds, trailheads, Forest Service offices).”

Forests affected by the program include the Klamath, Six Rivers, Shasta-Trinity, Mendocino, Lassen, Plumas, Sierra, Sequoia, and Inyo. The program is in response to numerous wildfires that have burned through these Forests in the last few years, including the three largest wildfires (by acreage) in the history of Forest Service management in California – the 1,032,648-acre August Complex Fire in 2020, the 963,309-acre Dixie Fire in 2021, and the 459,123-acre Mendocino Complex Fire in 2018. The program also includes hazard tree removal in response to 2020’s Creek Fire, which burned 379,895 acres of the Sierra Forest in 2020, the 318,935-acre North Fire on the Plumas Forest in 2020, and this year’s 223,324-acre Monument Fire, which burned into the Trinity Alps Wilderness on the Shasta-Trinity Forest.

The cleared areas would equal up to 1.5 times the average height of the dead and dying trees. Assuming the average tree height is 100 feet, that means a 150-foot-wide area would be cleared on each side of an affected road or trail, creating a cleared swath more than 300 feet wide. The Forest Service claims the program is needed to protect public safety from falling trees and to reduce fuel loading on the ground to reduce future wildfire threats.

Removing hazard trees will require skidding of logs to landing areas for processing and loading on trucks. Chainsaws or mechanical feller-bunchers will be used to fell the hazard trees. In addition to selling the hazard trees for lumber, firewood, or biomass, the removed trees may also be chipped, lopped and scattered, piled, and burned. The October 2021 project description fails to mention any reforestation efforts, nor is there any discussion about the likely need to re-enter areas post-project to prevent brush from encroaching on trails through physical clearing or spraying herbicides.

The public was notified of this regional project on October 25 and scoping comments were invited through November 15, 2021. The Forest Service may seek an “Emergency Situation Determination” (ESD) from the Chief of the Forest Service to expedite the proposed project. This would enable the agency to sell hazard trees for their commercial value before they begin to rot, but it bypasses the pre-decisional objection process, which allows the public and other affected agencies to object to project actions and negotiate positive changes.

CalWild submitted extensive scoping comments in response to the project, primarily focusing on sensitive areas that should be removed from the proposed project (click here to view CalWild’s five-page scoping comment letter). This includes cutting hazard trees along backcountry trails in the existing Bucks Lake Wilderness and in several roadless areas on the Shasta-Trinity, Mendocino, Plumas, Sierra, and Inyo Forests. Four National Recreation Trails would be adversely affected, along with trails in roadless areas considered for wilderness protection by the Forest Service in the 2016 Sierra and Sequoia Draft Forest Plans. The program also proposes to remove hazard trees along trails in the Chinquapin and Pattison areas proposed for wilderness protection in legislation sponsored by Rep. Jared Huffman and Senator Alex Padilla currently under active consideration by Congress.

In addition, extensive tree removal along trails could adversely impact the outstanding recreational values of California’s first Wild and Scenic River – the Middle Fork Feather – as well as along several Middle Fork tributaries. The program also targets trails following or crossing many other streams determined eligible by the Forest Service for Wild and Scenic protection on the Shasta-Trinity, Eldorado, Sierra, Sequoia, and Inyo Forests.

In the past, wildfire-damaged hazard trees in undeveloped areas and along backcountry roads and trails are removed annually before the start of the summer recreation season. This reduces the hazard of trees falling on recreational visitors. And it also allows for the conservative retention of trees damaged but not necessarily killed or condemned to die by the fire. But the Forest Service no longer has the funding or staff to remove fallen or soon-to-fall trees on an annual basis and over the hundreds of thousands of acres that have burned in the last few years. Roughly 120,000 miles of trail, or about 75% of the National Forest trail system, already require some level of maintenance or repair. The massive hazard tree removal program proposed by the agency may lead to significant trail repair in some areas, but at the expense of the wilderness and recreational experience.

CalWild’s comments did not opposes hazard tree removal along roads, although this too has its drawbacks. Wide swaths of forest along some of the most scenic highways and roads in Northwest California and in the Sierra Nevada are proposed for clearing. Eliminating hazard tree removal taking place in sensitive wild places like roadless areas will help expedite the process. In addition, our comments requested that project not be expedited in a manner that bypasses the crucial public review, comment, and alternatives development process provided by the National Environmental Policy Act (NEPA).