Land Acknowledgement: The China Mountain region is in the territories of three different Indigenous peoples: the Wintun on the east, Shasta to the north, and Chimariko in the Trinity River drainage to the south.

Trail mileage: Approximately 20 miles but can be split into two 10-mile segments.

Description of area, sights, wildlife and any key markers on the trail:

The Pacific Crest National Scenic Trail (usually shortened to PCT) runs for roughly 2,560 miles from California’s border with Mexico in the south to the border with Canada in the north. Along the way, it visits some of California’s most important wild areas. For more information on the PCT, please visit https://www.pcta.org/ 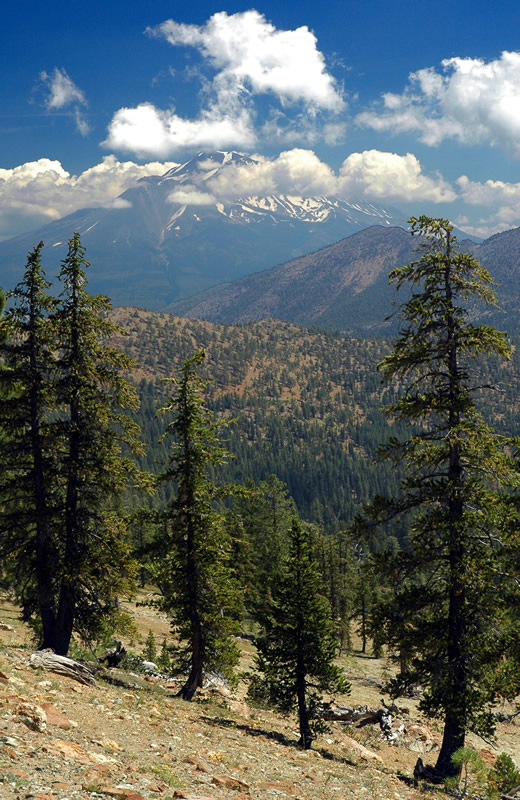 View of China Mountain. Photo by Carl Skinner from USFS

China Mountain is a 20,000-acre stretch of unprotected wild National Forest land in the Scott Mountains portion of the Klamath Mountains between Parks Creeks Road (Forest Road 42N17) on the east and State Highway 3 at Scott Mountain Summit to the west. Between these points, the PCT extends for 20 miles and largely follows the divide between the Scott River and Trinity River watersheds, Siskiyou and Trinity Counties, and the Klamath and Shasta-Trinity National Forests. As a divide between three watersheds, it stands to reason that the China Mountain region is in the territories of three different Indigenous peoples: the Wintun on the east, Shasta to the north, and Chimariko in the Trinity River drainage to the south.

This section of the PCT begins at 6,800 feet in elevation at paved Forest Road 42N17 and ends at 5,480 feet at Highway 3. This trail is usually much better maintained than are most National Forest trails in the region, so the path is easy to find and follow. By law, only foot, horse, and other “non-mechanized” modes of travel are allowed on the PCT. The PCT’s tread is almost always moderate, with extended steep stretches being quite rare.

The 20 miles of the PCT between Forest Road 42N17 and Highway 3 can be broken into two sections by using the Fen Trailhead near Kangaroo Lake Campground in the Klamath National Forest to access the PCT. The Fen Trail extends for about 1.1 miles to the PCT and visits rare and unique plant communities along the way, including small bogs called fens where the insect-eating California pitcher plant grows. From where the Fen Trail intersects with the PCT, one can travel 9.8 miles to the west to Highway 3 or 10.9 miles of the PCT heading east to Forest Road 42N17. Along both ways, the path passes beautiful high-country scenery of stunning ecological diversity. The PCT also allows access to several lakes and verdant meadows with short side-trips. The 10-mile segments can also be enjoyed as two 5-mile days with side-trips.

China Mountain, South China Mountain, and Cory Peak are composed of the oldest rocks in the Klamath Mountains. Cement Bluff near the PCT is a barren area composed of rounded rocks that appear cemented together. These are the remains of glacial gravel deposits formed during the Ice Age.

The region is particularly rich in plants and plant communities associated with serpentine, California’s official state rock. In recognition of this, the Klamath National Forest has established four “Botanical Areas” including one at China Mountain itself and others at Kangaroo Lake, Cory Peak, and Scott Mountain. The PCT visits all of these areas over its 20-mile course between Forest Road 42N17 and Highway 3 and offers hikers and equestrians opportunities to see forests of unusually high tree species diversity, including hemlock, incense and Port Orford cedars (the latter is restricted to southwestern Oregon and northwestern California), whitebark, western white, Jeffrey, foxtail, knobcone, and lodgepole pines, incense cedar, and Douglas-fir. This long list of species is no surprise given that the Klamath and Siskiyou Mountains contain the greatest diversity of cone-bearing trees on Earth. Because of these rich ancient forests, in 1994 the Forest Service designated China Peak as a “Late-Successional Reserve” (LSR). An LSR is an area that is meant to support species of plants and animals that depend upon mature or ancient forest to survive. The four Botanical Areas accessed by the PCT support over five hundred plant species in all.

Another reason to visit Cory Peak Botanical Area, besides the opportunity to encounter rare plants, is that a 0.8-mile detour to the top of the 7,671-foot mountain allows visitors to see every major peak in the region. On the other hand, even people who stick to the PCT will be rewarded with outstanding views of Mount Shasta Wilderness, Mount Eddy, and Trinity Alps Wilderness. Expect to see expanses of wildflowers in spring and early summer.  Many of the wildflowers in this area are geographically limited to the Klamath Ranges of northwest California and southwest Oregon, and some are very rare, such as Trinity buckwheat.

There are multiple lakes and springs near this segment of the PCT, but few directly on it. Bring plenty of water such as two quarts per person per day. Since this stretch of the PCT is alpine and subalpine the best times to visit this trail are June through October. Always check the weather before hiking the PCT. The PCT also makes an excellent skiing and snowshoeing route in winter from Highway 3. Kangaroo Lake offers the best base camp with paved roads, bathrooms, drinking water, a nice natural lake, fishing, the Fen botanical education trail, outstanding views, and multiple sites allowing for privacy. One can also camp at Scott Mountain Summit but there are no facilities. The trailhead on Forest Road 42N17 also has no facilities. “Dispersed camping” (camping almost anywhere you want for free without damaging the land) is always an option in both the Klamath and Shasta-Trinity National Forests. For dispersed camping best practices, please see https://www.fs.usda.gov/activity/klamath/recreation/camping-cabins/?recid=13053&actid=34. Dogs are welcome on National Forest portions of the PCT and may be off-leash on this particular segment.

Forest Road 42N17 (Parks Creek Road): Take exit 751 from Interstate 5 and follow Stewart Springs Road for 4.4 miles. Turn right onto Forest Road 42N17 and arrive at the PCT trailhead after 9.2 miles. From there, it is 20.7 miles of PCT trekking to Highway 3 at Scott Mountain Summit to the west, or 10.9 miles if you decide to use the Fen Trail.

Kangaroo Lake Campground and the Fen Trailhead: To reach the Fen Trailhead that connects to the PCT almost half-way between Road 42N17 and State Highway 3, take exit 751 from Interstate 5, turn left onto Edgewood Road for 0.1 miles and turn right onto Stewart Springs Road. Follow for 0.4 miles onto Old Highway 99. Follow for 7 miles to Gazelle Callahan Road. Follow for 16.3 miles and turn left onto Rail Creek Road. Look for Kangaroo Lake Campground and the Fen Trailhead on the right after 6.8 miles. As is noted above, the Fen Trail provides a 1.1-mile connection to the PCT and several botanical education points. From the Fen-PCT intersection, it is 9.8 miles to the west on the PCT to Highway 3 or 10.9 miles on the PCT heading east to Forest Road 42N17.

*Featured photo: Bull Lake with Mount Eddy and Mount Shasta in the background. Photo by Stephanie Hoffman from Alltrails.com

Caution: Weather and road conditions can change in an instant. Always check with the managing agency before embarking on a trip. Always hike with a friend and carry a cell phone for emergencies. Bring plenty of drinking water, food, and clothing for changing weather conditions. Let someone know where you are going and when you intend to be back. Remember, California’s wild places are beautiful but they can also be dangerous to the unprepared and unwary. The California Wilderness Coalition assumes no liability if you intend to visit any of the wild places featured in our materials

All stories by: CalWild
A Latino Conservation Week Event in the Desert
ED Report July 2022