On Friday, August 13th, the Bureau of Land Management (BLM) issued a draft Environmental Assessment (EA) and proposed land use plan amendment to the California Desert Conservation Area (CDCA) Plan for a proposed solar project (Oberon Solar) near I-10 and Desert Center in eastern Riverside County.  Documents related to this proposed project can be viewed on BLM’s eplanning website here:  https://eplanning.blm.gov/eplanning-ui/project/2001226/570.

The proposed Oberon Solar project is a 500-megawatt (MW) photovoltaic electricity generating facility and related infrastructure that would be constructed within a 4,700-acre (7.3 square-mile) block of public lands in the southwestern portion of the Chuckwalla Valley near Desert Center and within a Development Focus Area (DFA).  A DFA is an area that the BLM has designated as not only appropriate for renewable energy development, but an area where that development will be incentivized and streamlined. Despite the fact that the Oberon Solar project is proposed in a DFA (where it belongs), it remains quite problematic.  The primary reason is because the project proposal includes a proposed land use plan amendment that would exempt the project from compliance with certain conservation measures called “Conservation Management Actions” that were established by the 2016 Desert Renewable Energy Conservation Plan (DRECP), which were adopted as amendments to the CDCA Plan. Without exemptions from these Conservation Management Actions (CMA), the BLM has determined that the 500 MW Project would not be viable. 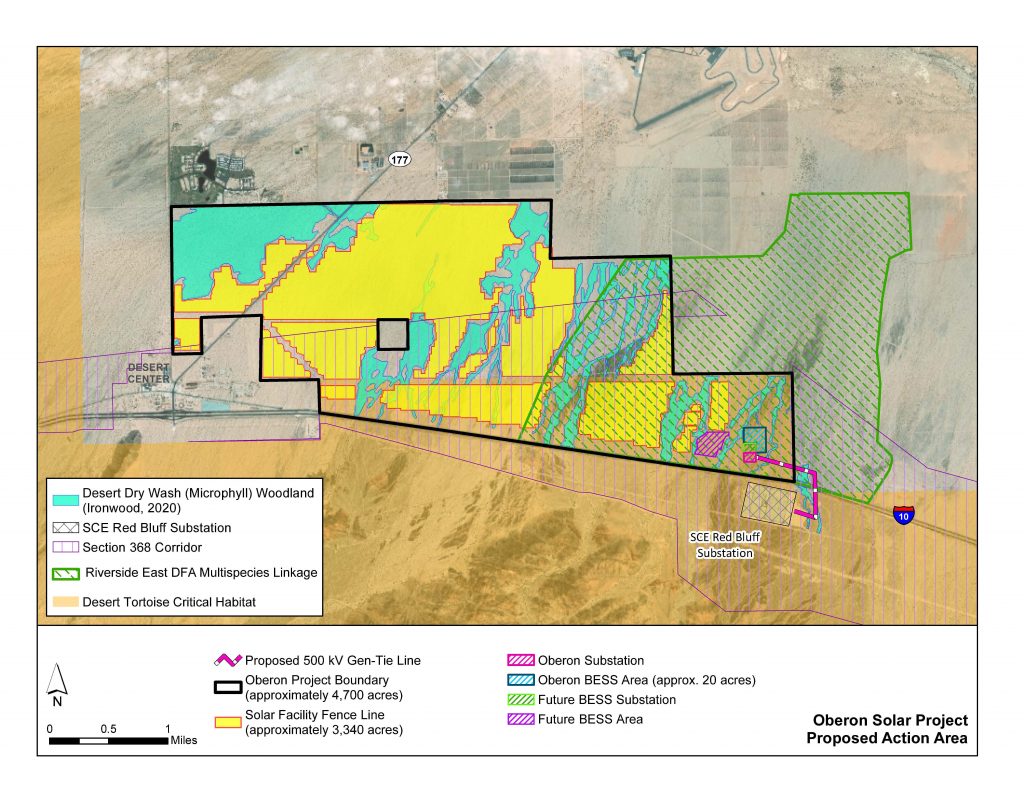 Although the BLM determined that application of existing CMAs that provide protections for microphyll woodlands and desert tortoises would preclude a 500 MW project from being approved, a smaller project that conforms to applicable, existing CMAs may be feasible.  Microphyll (meaning “small-leaf” woodlands) are habitats that are unique to the desert and that are extremely important to a vast host of species, especially deer and migrating birds. We are concerned that if the BLM proceeds with an amendment to the CDCA Plan to allow the project to be approved and constructed, through an exemption for compliance with CMAs, it will potentially establish a precedent for the BLM’s acceptance and authorization of future applications for renewable energy projects in DFAs by means of exemptions from certain CMAs. This would incrementally undermine the intent and function of the DRECP amendments to the CDCA Plan, leaving one to wonder why a number of us spent more than a decade working with the BLM and other agencies to complete and implement the DRECP. Even more concerning is the fact that this is the first solar project being proposed under the requirements of the DRECP and yet it violates those very requirements.

The DRECP CMAs were developed over a period of several years in cooperation with the California Department of Fish and Wildlife (CDFW), and subject to review and comment by the public, including numerous stakeholders.  When the DRECP was finalized, it represented a landscape-scale compromise among the myriad of interested stakeholders, that balanced renewable energy, conservation, and recreation in the California Desert.  Moreover, the intent of the CMAs was to provide certainty on what avoidance and minimization measures, design features, and compensation/mitigation measures would be required for particular projects within DFAs (and other land use allocation types in the California Desert).

The Oberon project is one of three new utility-scale photovoltaic solar projects proposed for inclusion within the East Riverside DFA that will be subject to compliance with the DRECP amendments to the CDCA Plan, including all applicable CMAs.  The Arica and Victory Pass solar projects also proposed for inclusion within this DFA will similarly be analyzed and disclosed in separate EAs.  If those project proposals follow suit and also seek to bypass CMAs, that would further undermine the intent and function of the DRECP. Doing so would put us right back where we were more than a decade ago – fighting each and every individual ill-conceived solar project. Ironically, this will likely end up impeding solar development in DFAs in the California Desert, because not only will this lead to uncertainty for developers, it will undoubtedly result in more lawsuits against developers and the BLM.

The BLM will hold a virtual public meeting about this proposed project and land use plan amendment on Wednesday, September 8th from 5 to 7 p.m. For more information, you can go to the BLM’s press release on the project.  After registering, participants will receive a confirmation email with instructions, a link to join the meeting and phone numbers for those unable to join online.

The public may submit written comments on the issues, potential impacts, alternatives, and mitigation measures presented in the EA by visiting the BLM’s ePlanning website at:   https://eplanning.blm.gov/eplanning-ui/project/2001226/570 (click the green button “Participate Now”).  You may also submit written comments by mail to:  Oberon Solar Project, Attn: Brandon G. Anderson, Bureau of Land Management, 1201 Bird Center Drive, Palm Springs, CA 92262.  The most important comment to make is that the BLM should not amend the CDCA Plan in order to exempt the proposed Oberon Solar project from the existing applicable CMAs.  The deadline to submit comments is Tuesday, September 14th.