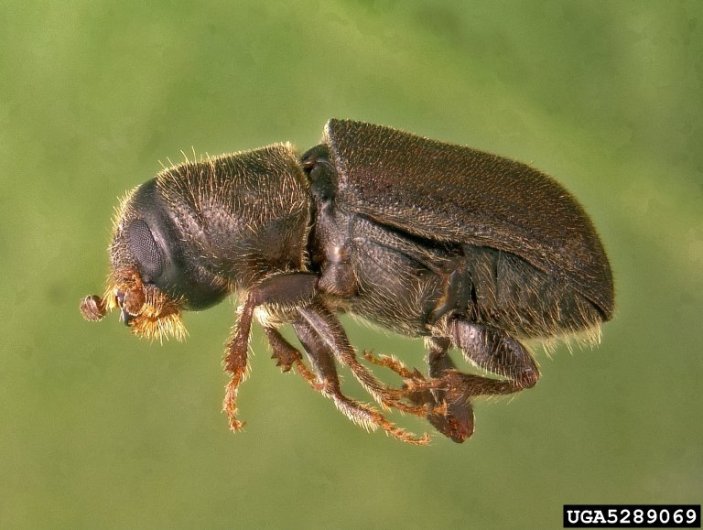 Anyone travelling the western slope of the Sierra Nevada in the last few years has probably noticed extensive stands of dying pine trees. The recent rise in tree mortality at mid-elevations of 3000-5000’ is due to the proliferation of the mountain pine beetle (Dendroctonus ponderosae).

This species, native to western North America, is currently responsible for the destruction of millions of lodgepole and ponderosa pines. Since 2010,  it is estimated that more than 105 million trees in California have died as a result of the population explosion of these insects; moreso, 65 million of those deaths have occurred since 2015.

One pair of mating beetles can produce more than 12 million beetles a year. The beetles lay eggs inside the inner bark of conifers where their larvae develop and feast on the trees’ phloem (tissue responsible for conducting water, sugars, and nutrients throughout the tree). These insects also carry a blue stain fungus, which contributes to the disruption of the tree’s metabolism and water and nutrient flow. The effect is to girdle the tree, resulting in death.

Under normal conditions the beetles are an important part of forest ecology. They attack old, sick, and weakened trees, maintaining healthy forests as a result. The recent outbreak has multiple causes:

From December 2011 to March 2017, the state of California experienced one of the worst regional droughts on record. This was the driest period in California history since the start of record-keeping. Healthy trees defend themselves by producing a sticky resin which blocks the beetles’ entry points; drought-stressed trees do not have sufficient water reserves to produce this resin, leaving them vulnerable to beetle infestation.

Under natural conditions fires should occur in the Sierra every 7-13 years. Sierra forests have grown unnaturally dense due to decades of fire suppression. Dense forests increase competition for water already in short supply due to the aforementioned record-breaking drought. This in turn promotes beetle population explosions.

It is difficult to link climate change directly to extreme weather, such as drought, or record breaking years of precipitation like California’s 2016-2017 winter season. It is known, however, that longer, hotter summers have expanded reproductive periods for these beetles, and milder winters have extended the lives of the adults. They are also spreading into higher altitudes and latitudes –habitats previously constrained by cold temperatures.

These outbreaks and massive tree die-offs will undoubtedly influence forest carbon storage and re-cycling, leading to other more serious and detrimental effects on our forest ecosystems.

Though foresters in Yosemite National Park are spending all their efforts removing dead trees from populated areas, there are no current effective methods of controlling these beetle infestations. As scientists continue to explore the relationships between these beetles and our changing climate, it is crucial to remind our federal and statewide Forest Service officials that climate change is real and a significant hazard to these places.

Learn more at the links below:

All stories by: CalWild
EVENT: Camp Iron Mountain Tour
Bills like HR 2936 should never make it this far