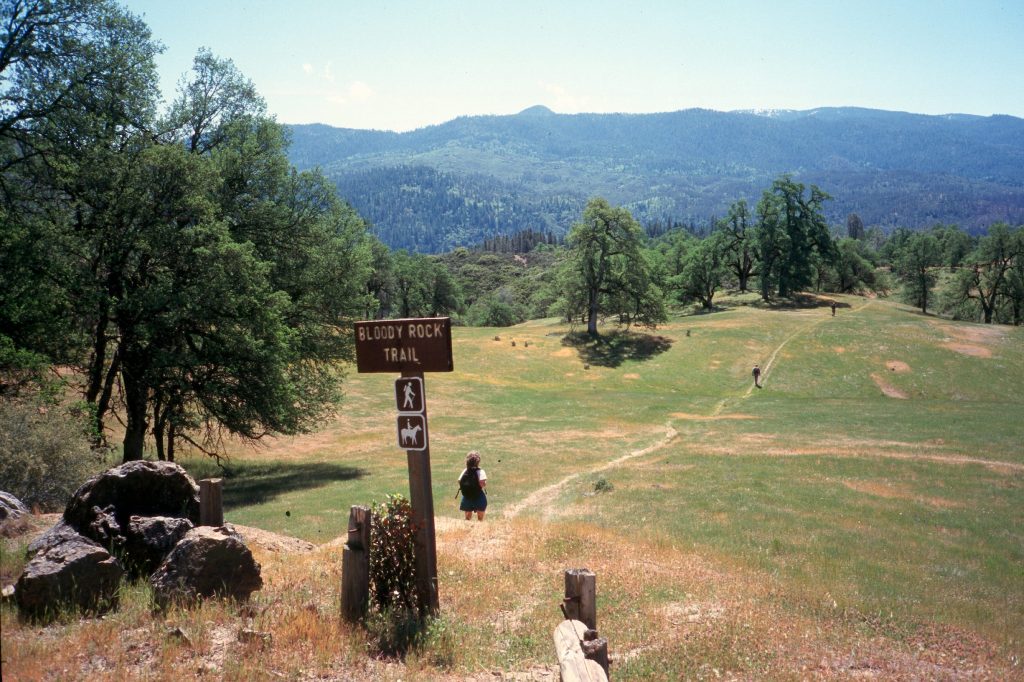 The staff of the Mendocino National Forest (MNF) are seeking public input on a proposal to expand the use of fire as a management tool on the Forest. Conservationists hope that if it is done right, it might help bring the MNF’s fire management approaches more in line with both ancient knowledge and modern ecological science. 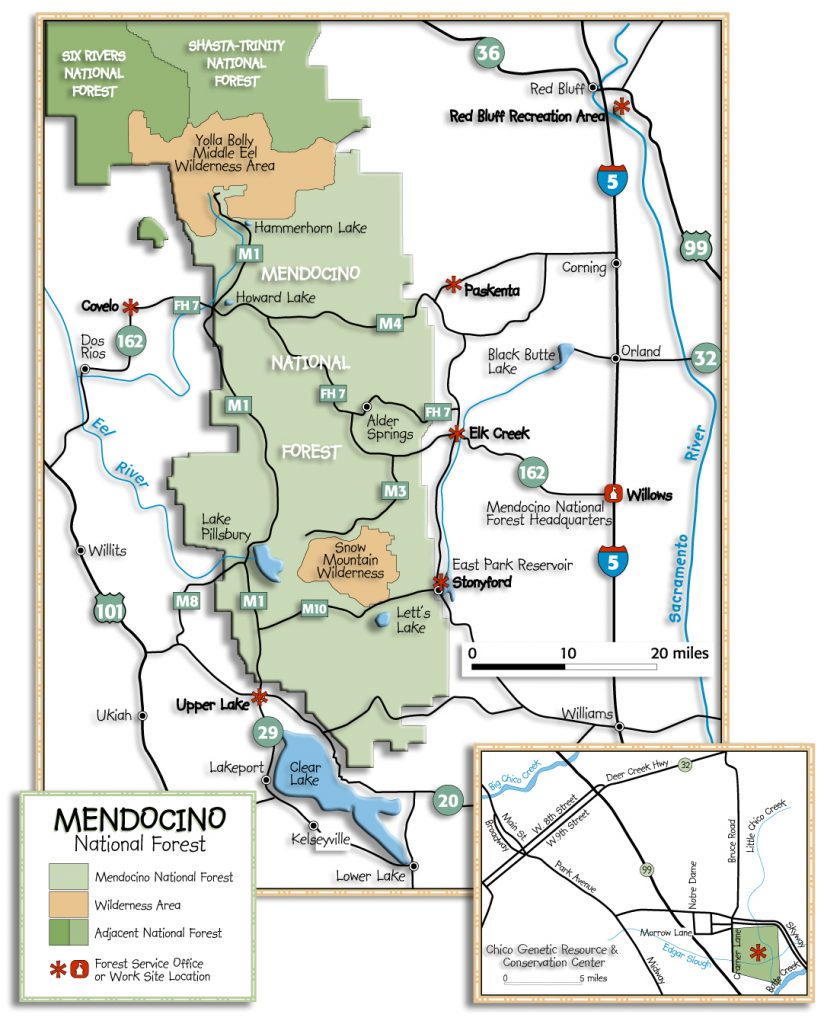 The MNF is an area of federal public land managed by the U.S. Forest Service (USFS) that straddles the inner northern Coast Range and southern Klamath Mountains in Lake, Colusa, Glenn, Tehama, Trinity, and Mendocino Counties. Its 913,000 acres (1,426 square-miles) include the headwaters of Cottonwood, Stony, Thomes, Grindstone, and North Fork Cache Creeks, as well as the Middle Fork Eel, Black Butte, and main Eel Rivers. The MNF is the only one of California’s 20 National Forests that is not cut in half by a paved road.

Elevations in the MNF range from 750 feet on the edge of the Central Valley west of Corning to 8,092 feet atop Mount Linn in the Yolla Bolly-Middle Eel Wilderness. Mount Linn (also called South Yolla Bolly) is the highest peak in the California Coast Range. The average elevation in the MNF is 4,000 feet. This makes it quite different from the National Forests of the Sierra Nevada, Cascades, and Modoc Plateau that tend to be at much higher elevations.

The Indigenous people who call the MNF home include the Pomo, Nomlaki, Yuki, Wailaki, and Lassik. For eons these people managed the landscape by carefully applying fire. In addition to fires used by native peoples, the plants and wildlife of the MNF evolved with fairly frequent lightning-caused fires that shaped every aspect of local ecology. These frequent (but often small) fires consumed wood, duff, shrubs, and small trees on the forest floor and kept these materials from building up and creating more severe fires. However, even then, there were also severe fires that wiped out vast numbers of trees, including mature trees. This, too, was a natural part of the cycle. Burned, dead trees offer a wealth of benefits to soil, plants, and wildlife.

When the U.S. government took over management of what would become the MNF over a century ago the policy was to suppress all fire. As the decades wore on, every time a lightning-caused fire was extinguished on the MNF, it ensured that future fires would be worse as young trees grew, shrubs sprouted, and tree litter built up in the forests.

At the same time, from the 1950s to the early 1990s “clearcut logging” (the removal of all trees from a logged area), “salvage logging” (the cutting of trees following a wildfire), and misguided replanting efforts replaced most of the MNF’s largest and most fire-resistant trees with thick carpets of small trees and shrubs that are more vulnerable to fire, insects, and disease. As big trees were converted to small ones, loggers also made things worse by often leaving behind wood debris called “slash” that greatly worsened fire severity.

As hundreds of miles of roads were built in the MNF to extract the big trees, there were more human-caused fires along these roads in the years after they were built. These road-related fires often occurred in different places and at different times of year than do lightning fires and this sometimes resulted in these fires causing more severe impacts than “natural” fires.

The consequences of the MNF’s disrupted fire ecology have been severe. For example, as a result of fire-exclusion, pines, firs, and shrubs have encroached upon and shrunk meadows, grasslands, and oak woodlands on the MNF.  This has led in turn to a decline in regional populations of some wildlife species.

As a result of decades of fire-suppression, misguided logging and replanting practices, and road construction, exacerbated by climate change, by the 2000s the MNF was ripe for conflagrations of great intensity and impact.

In 2018 the Ranch Fire burned the southern half of the MNF and in 2020 the August Fire burned the northern half. These were fires of extraordinary size. Their intensity and impacts are still being assessed.

Given these major events, the leadership of the MNF is now trying to rethink fire policy on the National Forest. One part of that effort is an ongoing series of public discussions about fire and fuels management called FireScape Mendocino. If you care about fire management on the MNF, you can get involved in this ongoing discussion here http://mendocinofirescape.blogspot.com/

Another significant part of the rethinking of approaches is the Mendocino Prescribed Fire and Fuels Management Project that will study the environmental and social impacts of using fire as a management tool on the 688,000 acres of the MNF that is outside of protected wilderness areas. Historically, wilderness areas have been one of the few areas on National Forests where “managed wildfire” is allowed. Managed wildfire is a non-human caused fire that is allowed to burn when conditions are optimal to achieve positive ecological and wildfire resilience outcomes.

The USFS is proposing to greatly expand the use “prescribed fire” and “manual treatments” to mitigate the future impacts of wildfire in strategic patches across the MNF such as near private land. This means that agency professionals would light fires in the MNF under carefully prescribed conditions and use the fires to mimic the lightning-caused fires and Indigenous fires that used to shape the MNF’s diverse habitats and keep them healthy. The phrase “Manual treatments” implies that the USFS would use axes, saws, clippers, loppers, and other tools to help keep the prescribed fires from getting out of control or becoming too intense.

More controversially, the MNF is also considering using logging (called “mechanical treatments” by the USFS) to help keep prescribed fires from getting out of control or becoming too intense. While we can support the careful thinning of mostly smaller trees in strategic locations such as along roads, or near private land or infrastructure, particularly to facilitate the use of prescribed fire, we cannot support the cutting of ancient trees on public land for any reason other than for public safety.

CalWild intends to study the MNF’s proposal carefully. We cautiously view it as a step in the right direction of restoring more “good” fire to the landscape. You can learn more about the Mendocino Prescribed Fire and Fuels Management Project here https://go.usa.gov/xHC52. Comments are due by May 8, 2021.