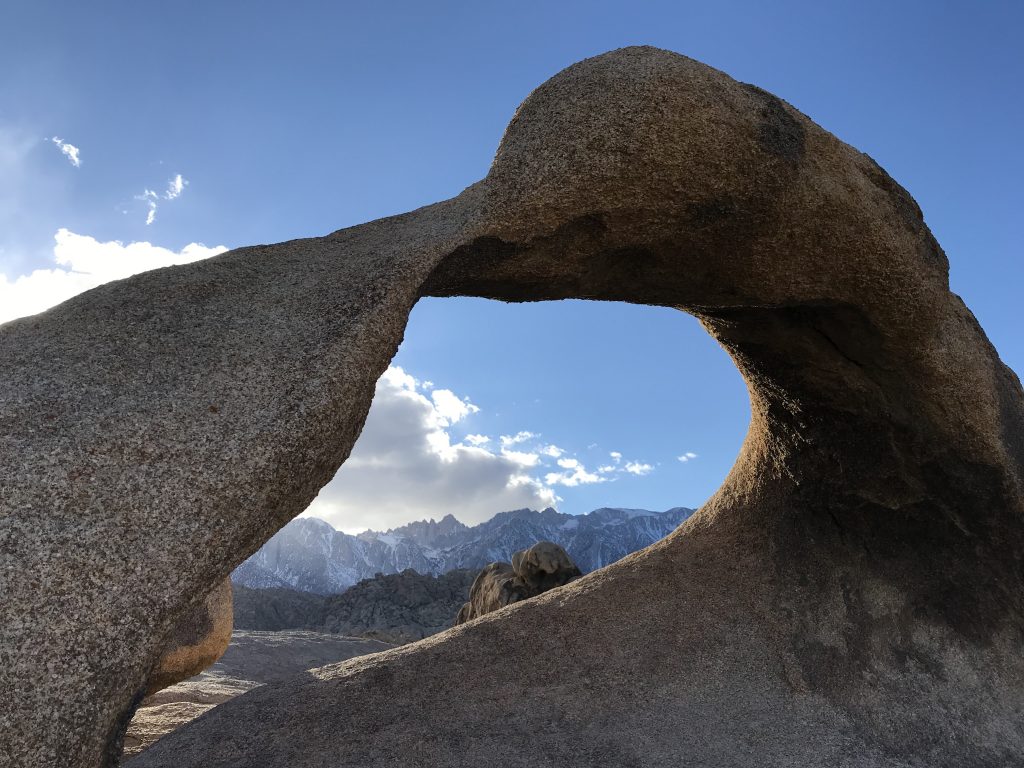 Reflecting on My Recent Adventures in the Alabama Hills 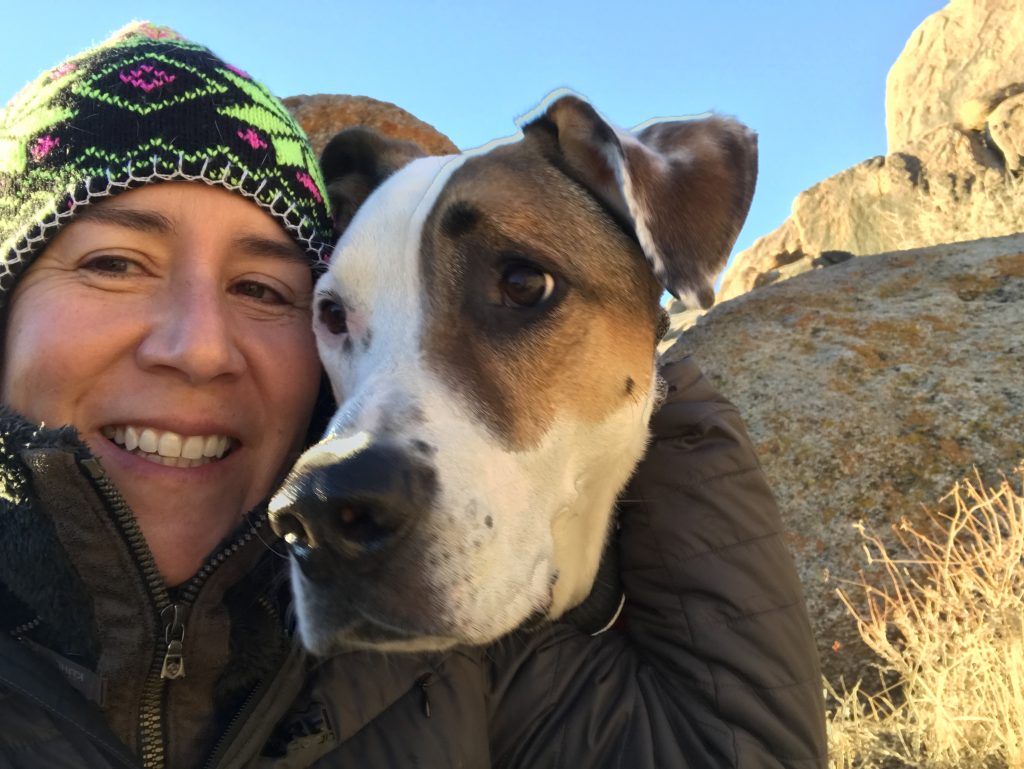 Linda and her dog, Cash

I recently needed to stay several nights in Lone Pine, California for work purposes.  I’m an early riser, so I chose to spend each morning exploring the Alabama Hills National Scenic Area (AHNSA) before I started the work I was there to do.  For those who have not yet visited this area, the Alabama Hills are a formation of rounded rocks and eroded hills set at the base of the Sierra Nevada Range on the western boundary of Lone Pine.

As soon as there was even a hint of light, my adventure-loving Dane-mix pup, Cash, and I headed out to explore.  Each morning we headed in a different direction, making impulse decisions to drive down a dirt road, hike on a trail, or scramble up whatever rock formation looked interesting.  I visited some of the most commonly visited rock formations such as Shark’s Fin, Mobius Arch, and the Eye of the Alabama, but also lesser known formations that do not have names (as far as I know).  The golden hills in the forefront with the backdrop of Mt. Whitney and the entire Sierra Nevada in the early morning hours was breathtaking and awe inspiring.  The bone-chilling air and strong winds made photography challenging – especially my numerous attempts to take an acceptable selfie with Cash.  After countless tries, I was finally able to take one I was happy with!  I am by no means a professional photographer, but I love taking photos of beautiful, wild places so I was in heaven despite the cold temperatures.  I took all of the photos associated with this piece with my cell phone – hardly professional! 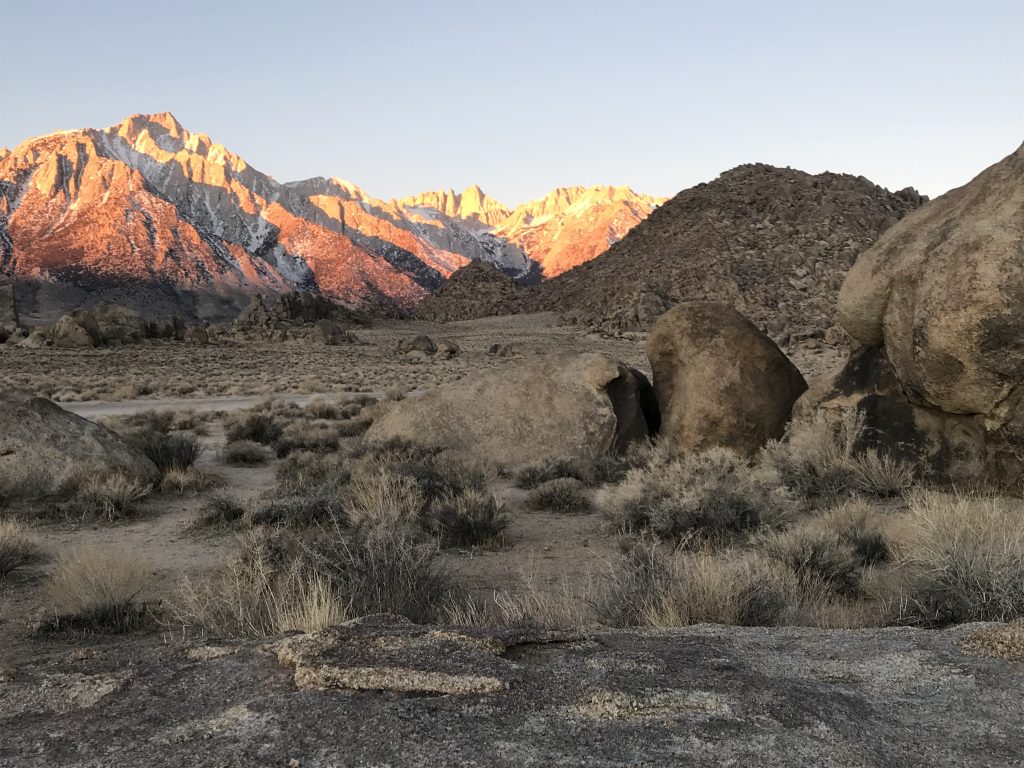 Alabama Hills with Mt Whitney in the background

As I hiked, scrambling through and over the rock formations in the peaceful silence of those mornings, I thought about a myriad of things. I thought about the people who had been in those locations before me and what life may have been like for those people who first inhabited the area – the Numu (Northern Paiute), Newe (Western Shoshone), and Eastern Mono/Monache people.  In particular, I thought about how all of those people had seen the same spectacular glow of the early morning sun on the Alabama Hills and Mt. Whitney as I was seeing each of the mornings when I was there, even though they saw it thousands of years ago.  I thought about the mining prospectors, ranchers, and others who came to the area (or passed through the area) looking for a better life in the 1800s.  I also thought about how it would be nice to visit friends who resided nearby and how I wished that group gatherings and face-to-face interactions could soon take place again without the looming threat of COVID. 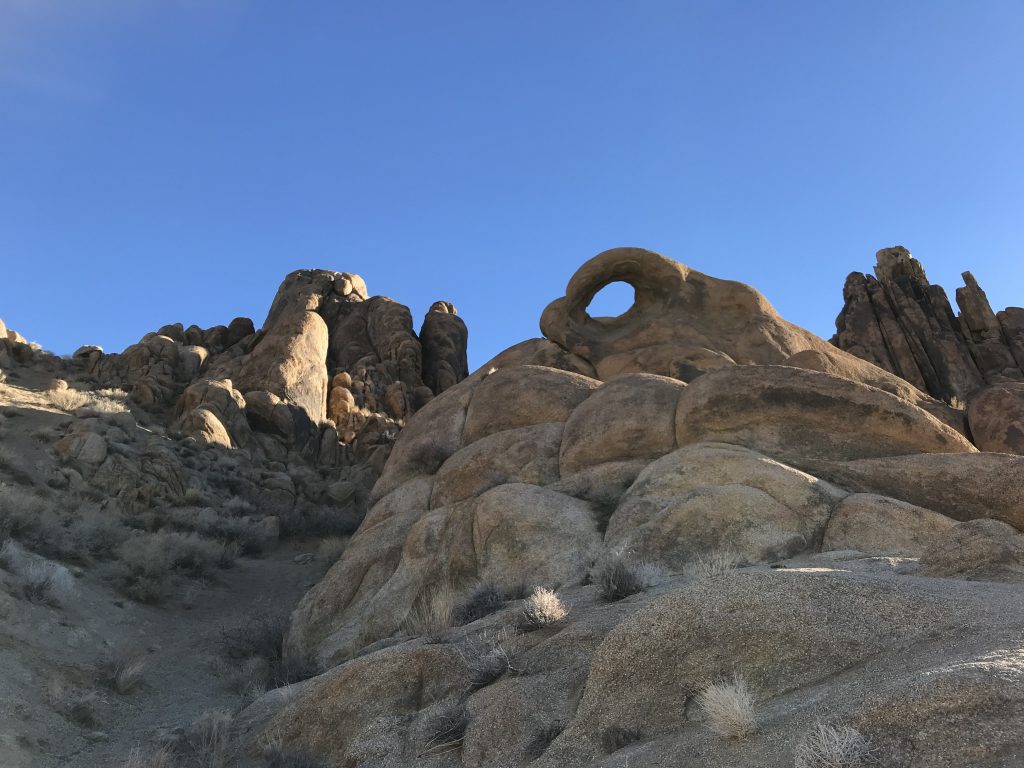 The Eye of the Alabama Hills

I also reminisced about all of the years of work that had gone into getting the Alabama Hills designated a National Scenic Area.  CalWild was one of a number of organizations that supported and advocated for the passage of Senator Dianne Feinstein’s and Representative Paul Cook’s California Desert Protection and Recreation Act, which passed as part of a larger package of bills called the John D. Dingell, Jr. Conservation, Management, and Recreation Act on March 12, 2019.  As I stood on top of a large rock formation that allowed me to overlook a huge swath of the AHNSA, I thought about the three-year anniversary of the designation that was fast approaching; how privileged I was to work on getting that legislation passed; and how much more privileged I am to have a job that allows me the opportunity to work on protecting more wild and spectacular landscapes throughout California. All of these thoughts brought a smile to my face.

One might wonder why an area in the Owens Valley area of California would have the name “Alabama” in it.  I wondered the same thing, so I looked it up.  Mining prospectors in California who were sympathetic to the Confederates, named the area the Alabama Hills for the CSS Alabama, a Confederate warship deployed during the American Civil War.  They named a number of mining claims after the ship and the name eventually came to be applied to the entire area. 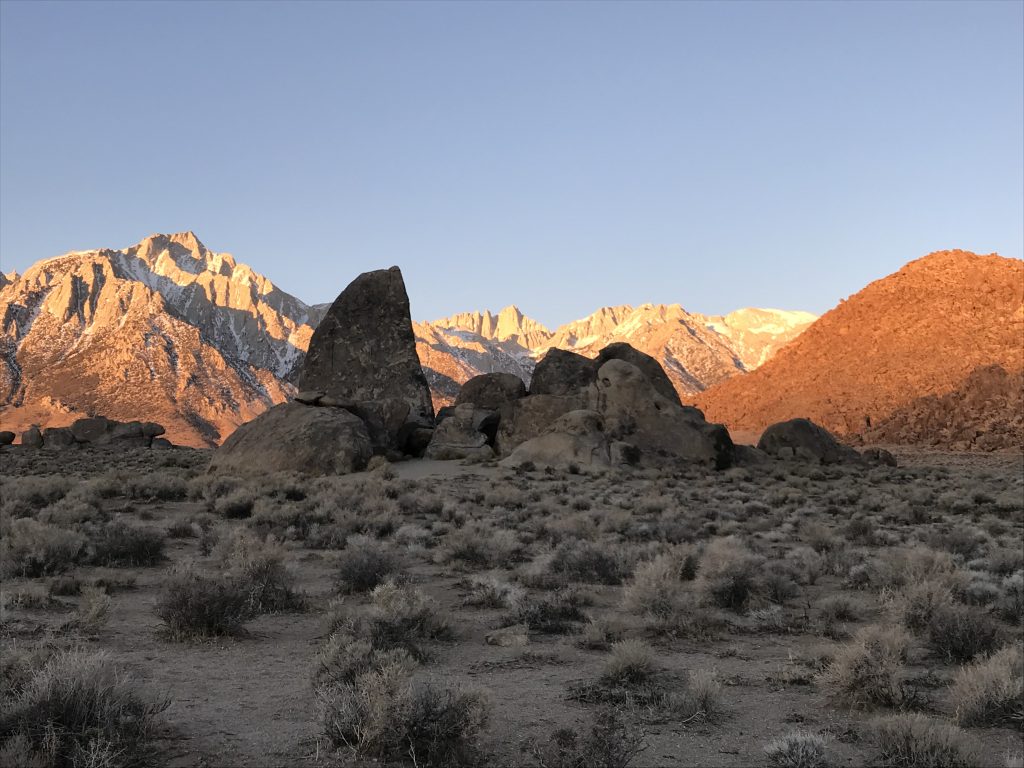 The Shark’s Fin and Mt. Whitney in the Alabama Hills

One last interesting tidbit about the Alabama Hills – the entertainment industry has long used the Alabama Hills area to film movies (especially westerns) and commercials.  In fact, for those who recently watched the Super Bowl, the Salesforce commercial with Matthew McConaughey and Toyota’s Keeping Up with the Joneses commercial were both filmed in the Alabama Hills.  A visit to the area (or at least a quick look at photos taken there) makes it easy to see why.