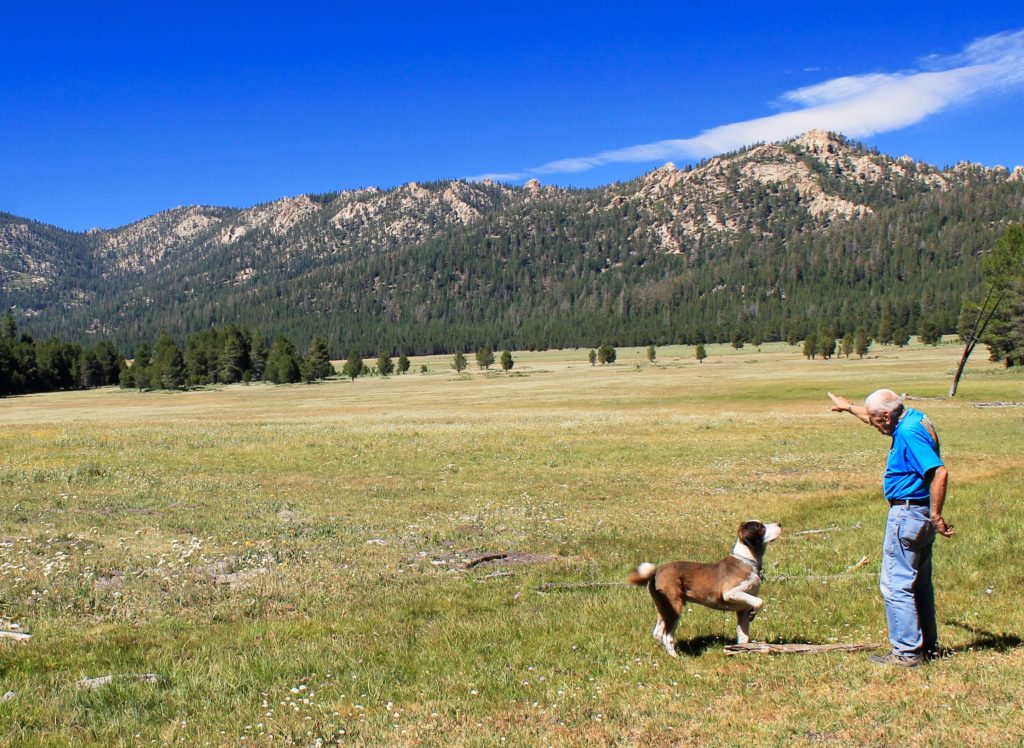 Joe Fontaine literally wrote the book on the Kern Plateau. The Kern Plateau and Other Gems of the Southern Sierra (self-published by Fontaine in 2009) is a great guide to the unique natural and cultural resources of the high country between the North and South Forks of the Kern River in the southern Sierra Nevada. Joe has been fighting to protect the Plateau since the 1960s and he hasn’t stopped yet.

Now in his 80s, Joe grew up in Bakersfield, served two years in the Army, majored in geology at UCLA, and taught school for most of his life. As a child, he remembered the few clear days in Bakersfield when the high peaks of the southern Sierra would beckon to him. While home from attending UCLA, he often bush-wacked up Salmon Creek, which tumbles over the Plateau in a spectacular 400-foot high waterfall, to fish for golden trout. That’s how Joe fell in love with the Kern Plateau.

The Forest Service’s construction of the Sherman Pass Road in the 1960s, which cleaved the Plateau and the Sequoia National Forest in half, initiated decades of clear cut logging of the Plateau’s primeval forests. Joe, who first attended Sierra Club meetings to discover new places to hike and fish, became an active member and started fighting timber sales. After 20 years of working to protect the Plateau’s wild places, Joe was elected to the Sierra Club Board and served as its President from 1980-82.

Joe worked closely with Norman Norris, a former Sequoia Forest Supervisor who opposed road construction and logging on the Plateau, and first proposed comprehensive protection for the area. He also was worked with Ardis Walker, who organized the Kern Plateau Association and ally of Martin Litton, a long time conservationist, pilot, and former Sierra Club board member.

Establishment of the Domeland Wilderness with the passage of the Wilderness Act in 1964 was the first major step taken towards securing permanent protection of the Kern Plateau. Joe and his allies secured protection for the Golden Trout Wilderness on the Plateau with the passage of the Endangered American Wilderness Act in 1978. He helped establish the South Sierra Wilderness and enlarge Domeland in 1984. He supported the passage of legislation to protect the North and South Forks of the Kern River as National Wild & Scenic Rivers in 1987. Joe, Litton, and a host of others convinced President Bill Clinton to establish the Giant Sequoia National Monument west of the Plateau in 2000. Joe also worked to protect the high country around Mineral King by establishing the John Krebs Wilderness in 2009.

But the unprotected portions of the Kern Plateau are still threatened today by logging, road building, and poorly managed off highway vehicle use. That’s why Joe is involved in the Forest Service’s current revision of the Sequoia National Forest Plan. One alternative would expand the Domeland, Golden Trout, and South Sierra Wilderness areas, while protecting new areas like Cannell Peak and Stormy Canyon along the North Fork Kern Wild & Scenic River. Unfortunately, the alternative currently preferred by the Forest Service doesn’t recommend any Wilderness (to view and act on alerts on this and other forest plans, please visit CalWild’s Action Page).

Joe has played a key role in the successful protection of nearly a million acres of wild lands on the Kern Plateau and southern Sierra over the past 50 years. But he would be first to lay those accolades on Norman Norris, Ardis Walker, Martin Litton and others. After a recent hike along his beloved Salmon Creek, Joe told me the story of Kern Plateau conservation efforts and tears welled up in his eyes.

“I wish I could go back and show Norman (Norris) what we have accomplished,” said.

But Joe’s work is not yet done. He would particularly like to have the Forest Service identify Salmon Creek to be eligible for Wild and Scenic River protection and to see the Domeland and Golden Trout areas further expanded. He thinks that these steps would nearly complete Norris’ original plan to protect the Kern Plateau. Meanwhile, Joe continues to write letters, go to meetings, and urge people to take action to protect the Plateau’s wild places.

All stories by: CalWild
Potrero John Trail
The Next Step for the San Gabriel Mountains