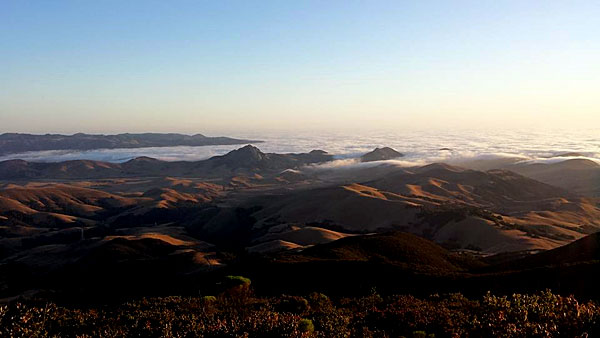 Hiking Through All 400 Miles of Los Padres National Forest 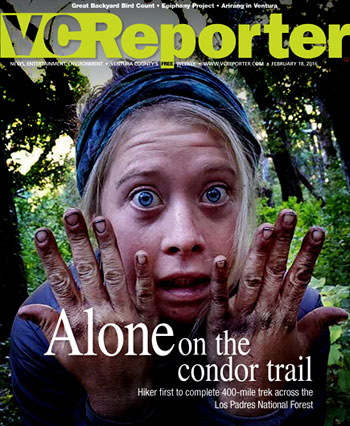 For Brittany Nielsen, the first person to complete the Condor Trail from one end to the other, the journey was a physical, emotional and spiritual test as she overcame hypothermia — as well as a torn meniscus, GPS malfunction and one-on-one encounter with a bear.

“What I did changed me,” said Nielsen, 30, of San Diego. “It was a very existential experience. And I want to do it again.”

[Excerpt from Alicia Doyle’s cover story from the Ventura County Reporter. Read the full article below.]

The Condor Trail is a “conceptual” trail, meaning incomplete. “There is often not a trail and it requires navigating and a lot of bushwhacking,” Nielsen explained.

She is considered a “thru-hiker,” which is someone who completes a trail from one end to the other — typically without hitchhiking or any other mode of transportation other than hiking on foot.

“Mostly, it means you hike a trail consistently, the whole way,” said Nielsen, who is self-employed as a massage therapist.

“It took me 37 days, which was way longer than anticipated but I ran into storms and a few big setbacks,” she said. “The trail itself consists of 411 miles; however, I hiked a lot more than that as my GPS crapped out and I spent a lot of time lost and rerouting with a paper map and compass.”

Nielsen is the only person that has ever hiked the entire length of the Los Padres National Forest on the Condor Trail, which spans roughly 400 miles, said Matthew Sayles, Central Coast conservation director for the California Wilderness Coalition.

“Many stretches she traversed see only a handful of hikers and horseback riders in any given year,” Sayles said.

The terrain is incredibly rugged, and the trail itself can be exceedingly difficult to navigate in any condition — let alone the extreme drought conditions she faced, he said.

“What Brittany has completed is not only an amazing physical and mental accomplishment, it’s a huge inspiration to all of us that support the vision of the Condor Trail,” Sayles said. “It helps raise public awareness of the incredible recreational opportunities in the Los Padres National Forest — especially along a wilderness route like the Condor Trail.”

Do you know what you’re in for?

The Condor Trail is a route designed to connect the northern and southern portions of the Los Padres National Forest by a single hiking trail. The trail extends from Lake Piru on the border of Los Angeles and Ventura Counties, in the south, to Botchers Gap just south of Monterey in the north.

“For the last four or five years, I’d get a phone call from only a few people interested in doing the trail,” said Bryan Conant of Goleta, who has been the primary advocate and organizer of the Condor Trail since 2008.

“The first thing I try to do is scare the hell out of them — do you really understand what you’re getting yourself into?” Conant said. “The forest itself is an acquired taste. It doesn’t have the lakes or the fishing. It’s more of a harsh terrain.”

When Nielsen expressed interest in making the journey, “I tried to scare her through emails — do you know what you’re in for? What is your experience? There will be days and weeks where you don’t see anybody, and there are 10-mile stretches where there might not be any indication that you’re on a trail,” said Conant, who has hiked most of the Condor Trail himself.

“But Brittany kept coming back and continued to charge ahead,” he said.

Conant and Nielsen spoke on the phone and met several times preparing for the journey.

“I provided her with maps, and the whole time she kept saying she was going to do it,” he said. “I still sort of thought the chance of her completing wasn’t very good. It had nothing to do with Brittany — just nobody had done it before, alone.”

Nielsen took only six days’ worth of food, and throughout the remainder of the journey, Conant arranged “drop-off” points where she could pick up new food supplies along the way.

“We had set her up to have a tracking mode,” Conant said. “Every 10 minutes the tracker would send a ping to a satellite. So we could watch her walk along.”

At one point on in the journey, the tracker stopped working.

“So we had no idea where she was or how she was doing,” Conant said. “On day 3 it popped up and she was going backwards. There were a lot of hiccups especially along the first part where she was trying to figure out the rhythm. I didn’t think she’d get past the third day, but she kept charging on. She said ‘I’m gonna keep going. I set my mind to this.’” 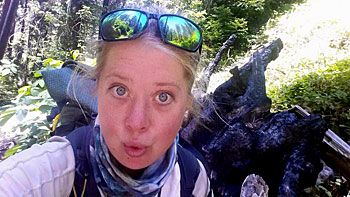 Selfie taken on the trail.

I was very much alone

Nielsen, who has been hiking for several years, heard about the Condor Trail in January of last year after completing her yearly “birthday hike” from the Salton Sea to Torrey Pines.

“When I finished that hike in 2015 I got the bug and wanted to do something bigger,” said Nielsen, who has also hiked in Alaska. “I’ve had my eye on the Condor Trail for a while, but no one had done it. What makes the Condor Trail different is, there are no towns and not a lot of roads. There’s nothing out there.”

For clothing, she brought three pairs of socks and two jackets as well as a tank top, long-sleeved shirt, leggings, beanie and sun hat.

She carried six days’ worth of food, and relied on drop-off points to obtain additional food supplies along the way.
During the hike, she occasionally had human contact — but for the most part, it was rare.

“I was very much alone; it’s different than other hikes because you’re by yourself,” she said. “Usually when you hike, every three days you usually go to a town. Here you don’t have that. You’re by yourself all the time.”

The journey started out rough, Nielsen wrote on her blog.

“This day was bad,” she wrote about her experience on day 2. “The decline down to Agua Blanca was gentle, green and pretty. Easy hiking … several waterfalls. Beautiful. It started misting, which was welcome. But pretty quickly the sky just snapped in half. Buckets and buckets on my head. Big fat rain.”

“The thing about this section is the goddamn, motherfucking vegetation hates you,” she wrote. “All alongside the creek are the bushes — taller than me — that are tangled and stiff but not dead. They don’t break when you try and snap them. They fly back at you — usually into both of your open eyes simultaneously. But not only do they grow vertically but there are other bushes that weave in and out them horizontally, creating a net of green stick. Making it maddening, if not impossible, to push through. I was caught several times — arms and legs tangled — totally unable to move.”

Nevertheless, she kept on going.

On day 12, when she was on the ridge between Malduce Camp and Alamar Saddle-Cliff Camp, she wrote about the beauty of the scenery.

“It’s so gorgeous,” Nielsen wrote. “You can see until the end of the world. … Tall, unbelievable trees and I am picturing how great of perches they must make for these eagles and condors.”

Day 12 also marked a pick-up point for food and other supplies, which were left for her in a large ziplock. On the bag, a white piece of paper was attached with the words “SAVE 4 CONDOR TRAIL THRU-HIKER” written in purple.

Inside the bag she found a block of cheese, a few packets of spam, a tuna packet, two cracker packets, mini candy bars, a small hunk of duct tape, gauze and a few Bactine wipes.

“I’m smiling so big. … I open the bag, it’s the most exciting moment of my life,” Nielson blogged. “Basically, this is the happiest day of my life.” 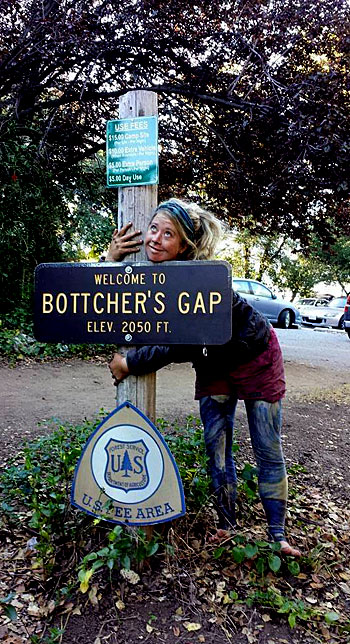 Nielsen wanted to complete the trail in 25 days, but mishaps along the way — including the malfunction of her GPS — made the journey longer.

“So I literally had to use a paper map and a compass,” she said.

At one point, she encountered a bear.

“I was hiking at night; I was tired and a mile away from where I wanted to be,” she recalled. “I turned the corner and there she was, about 12 feet away from me. I put my walking poles over my head and yelled, ‘Shoo!’ ”

The bear encounter didn’t create as much fear for Nielsen as the possibility of coming face-to-face with mountain lions.

There were a few times Nielsen wanted to quit. One time, when she was at a breaking point, she communicated with Conant, who gave her a “zero day” by connecting her with people who live near the trail.

“One day I was frazzled, where I started to break down,” she said. “I met this adorable couple who brought me a barbecue sandwich and a beer and took me to their house where I could shower. Then they dropped me back off on the trail the next day.”

Another time, near the end of the trail, she said she panicked and called Conant with one bar left on her cell phone.

“I said, ‘I’m done — it’s too much, I don’t like this anymore.’ I said, ‘You need to come and get me and take me home,’ ” Nielsen remembered. “I took my shoes off; I dumped out my entire backpack and threw each item as hard as I could. I was sitting there and my shit was everywhere.”

Conant calmed Nielsen down, told her to hang up and collect her belongings, and call him back. After about an hour, she was ready to finish the hike.

“I just put everything back together and kept going.”

Nielsen, who is still recovering physically and emotionally from hiking the Condor Trail, said she plans to do it again in the spring.

On her blog, she wrote that the next time she hikes, she will be better prepared.

“I will bring a balaclava made of kevlar and hockey forearm and shin covers,” she wrote. “My hair will be in corn rows and I’ll have very tight-fitting shades that wrap around my head or, better yet, goggles.”

“Now I know what I’m doing and I have an idea of what it’s like, and I can prepare myself for that,” Nielsen said. “This trail is conceptual — it’s not a trail so someone needs to hike it a number of times to make a trail.”

Looking back on her experience, she said the journey “changes you in a good way.”

“At no point in time did I think I was going to finish — and I did.”

California’s Central Coast includes some of the most diverse habitats and ecosystems found anywhere in North America. Los Padres National Forest, California’s second-largest national forest, rises from the Pacific Ocean to over 8,800 feet in elevation and provides habitat for 468 species of wildlife, including the endangered California condor and the southern steelhead.

“For the last five years, we have been working on identifying wild lands and rivers suitable for permanent protections and working with stakeholders and forest-users to protect more of our invaluable wild backcountry,” said Sayles, lead organizer on the Central Coast Wild Heritage Coalition.

“But Sen. Boxer and Rep. Capps are retiring at the end of 2016, so the future of these lands is uncertain,” Sayles said. “We’re working to keep the momentum going by urging our congressional representatives to request committee hearings for these important bills.”

Sayles further emphasized that raising the awareness of the Condor Trail right now is crucial.

“The time is short to pass the Central Coast Heritage Act,” he said. “This legislation is the best chance we currently have to designate the Condor Trail and protect vital wild-lands and rivers on the Central Coast.”