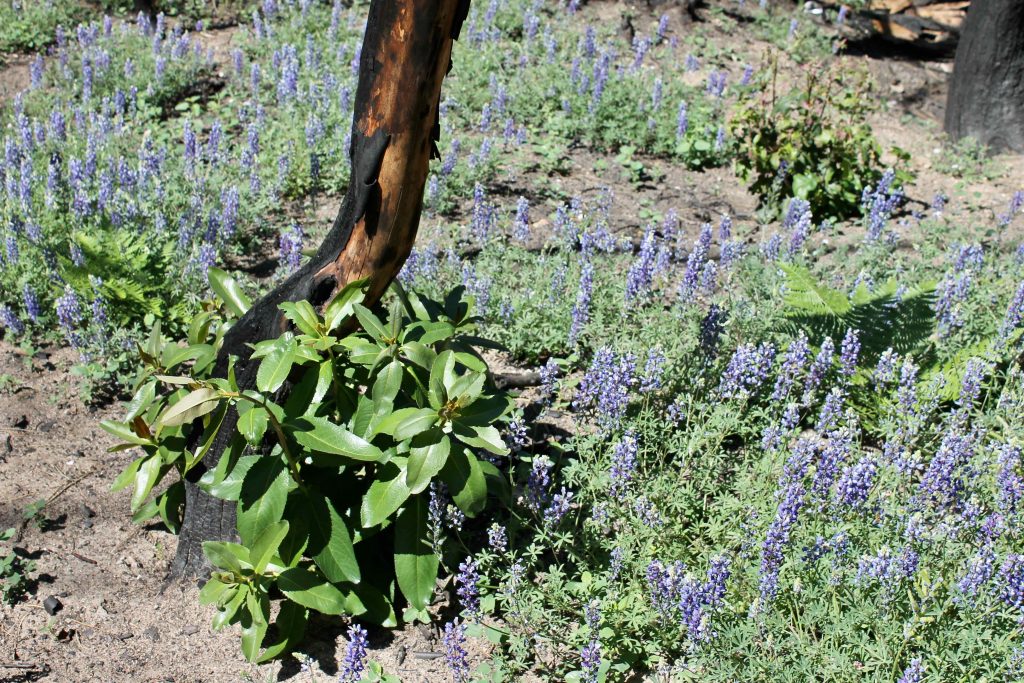 By any measurement, 2020 was a hellacious wildfire year in California. More than 9,000 wildfires burned over 4.3 million acres of land. At one point in September, what would become five of California’s six largest wildfires in history were burning simultaneously. The skies turned a post-apocalyptic orange from the smoke. Most people were forced to stay indoors and helplessly watch the news reports of 12,000 fire-fighters desperately trying to save forests and mountain communities.

One of those fires was the North Complex – an amalgamation of two smaller lightning-caused fires (Bear and Claremont) on the Plumas National Forest that subsequently merged. In its first 23 days, the fire burned about 39,000 acres, stretching from Highway 70 near Quincy westward along the north rim and canyon of the rugged Middle Fork Feather River to a major tributary, Bear Creek.

Then fiercely hot winds on September 8th blew the complex into a blaze that in 24 hours nearly doubled the acreage that had burned in the previous three weeks. On September 9th, the fire raged even more uncontrollably to the southwest all the way to Oroville Reservoir, burning a record 193,759 acres in one day. Despite the wide expanse of Oroville Reservoir, the North Complex Fire jumped the reservoir and began burning into the rural suburbs of Oroville. But fortunately, the weather moderated and the fire’s advance ultimately slowed. Nevertheless, the North Complex Fire was not declared contained until December 7th.

In the end, the North Complex Fire was the sixth largest wildfire in California. It burned 318,935 acres of public and private forest lands, destroyed 2,352 structures and wiped out the small mountain communities of Berry Creek and Feather Falls, and killed at least 15 people. Trees suffered 90-100% mortality where the fire burned the hottest, particularly in the Middle Fork canyon and the western portion of the burn area. Dozens of backcountry campgrounds, trailheads, and trails in and surrounding the Middle Fork have been closed for public safety due to the hazard of dead trees falling. Several areas set aside for California spotted owl and goshawk nesting and foraging sites also burned. The U.S. Geological Survey estimates that the Middle Fork and many of its tributaries will suffer from debris flows in response to winter rains (https://landslides.usgs.gov/hazards/postfire_debrisflow/detail.php?objectid=355).

Now it’s time to pick up the pieces. 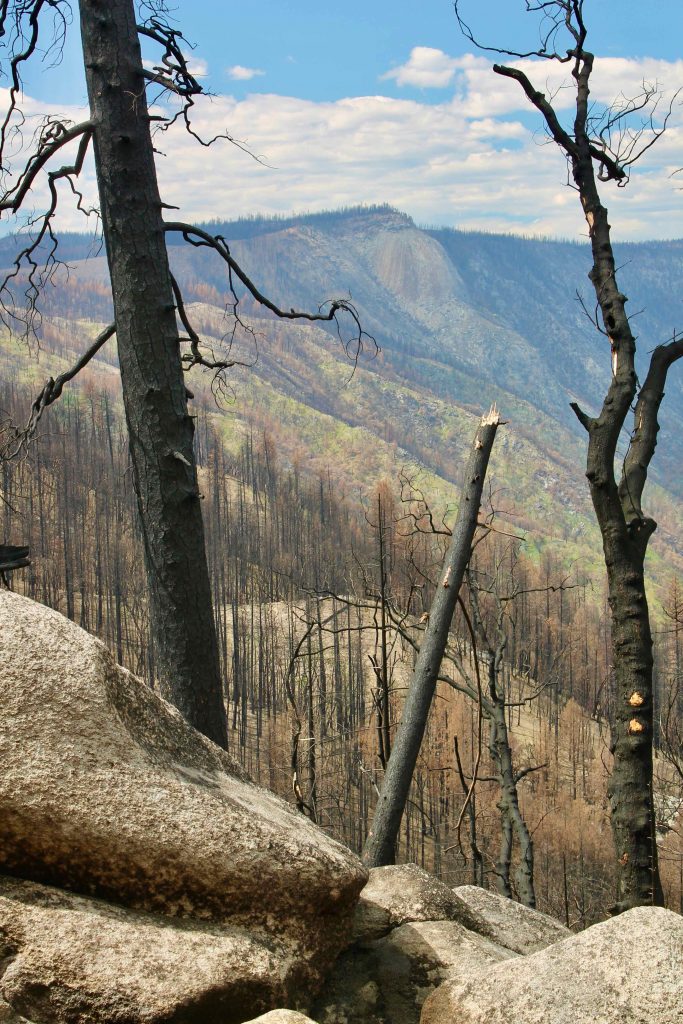 A view of the scale of the North Complex Fire’s impact on the area. Photo by Steve Evans.

The North Complex Wildfire burned most of the Middle Fork Feather Wild and Scenic River, along with 33,000 acres of potential wilderness in two Inventoried Roadless Areas (IRA, a Forest Service wild place that the agency has agreed to protect to some degree) surrounding its rugged canyon and encompassing many of its tributaries. Designated when the National Wild and Scenic River System was established by Congress in 1968, the Middle Fork was the first National Wild and Scenic River in California. The designation protects the free-flowing river from proposed dams and it requires the U.S. Forest Service to manage a corridor that averages one-fourth of a mile on each side of the river to protect its outstanding scenery, recreation, fish, and geology values. Many of the Middle Fork’s burned tributaries, including the Little North Fork, Bear Creek, McCarthy Creek, Onion Valley Creek, South Branch Middle Fork, and the Fall River were identified by the Forest Service as eligible for Wild and Scenic protection. Restoration activities for these wild lands and waters will look quite a bit different than the adjacent roaded forests previously managed for timber that also burned in the North Complex.

The Middle Fork is one of the wildest and least developed watersheds in the northern Sierra Nevada, with extensive roadless lands and several tributaries eligible for National Wild and Scenic River protection. It supplies clean drinking water to 27 million people served by the State Water Project. The rugged and remote river canyon provides outstanding opportunities for backcountry recreation, including hiking, backpacking, camping, fishing for wild trout, world class whitewater, and enjoying spectacular scenery (including many waterfalls). The Pacific Crest Trail, Hartman Bar National Recreation Trail, Feather Falls National Recreation Trail, and other backcountry trails provide access to this wild canyon. Anglers visit the river in search of wild trout. Climbers challenge the sheer rock walls of Bald Rock Dome. Expert kayakers run the class III-IV whitewater found in the river and many of its tributaries. The canyon provides important habitat for the California spotted owl and goshawk. The river and adjacent lands are also rich in Indigenous cultural values and Gold Rush history.

The Feather Falls area was included as a proposed wilderness in Senator Barbara Boxer’s 2002 California Wild Heritage Act. The 9,000-acre proposal was subsequently included in various iterations of the Act reintroduced for the next several sessions of Congress.

The post-North Complex Fire challenge is to restore the area in a manner that maintains its wild values, assists recovery of its natural ecosystems, and retains its primitive recreation values. 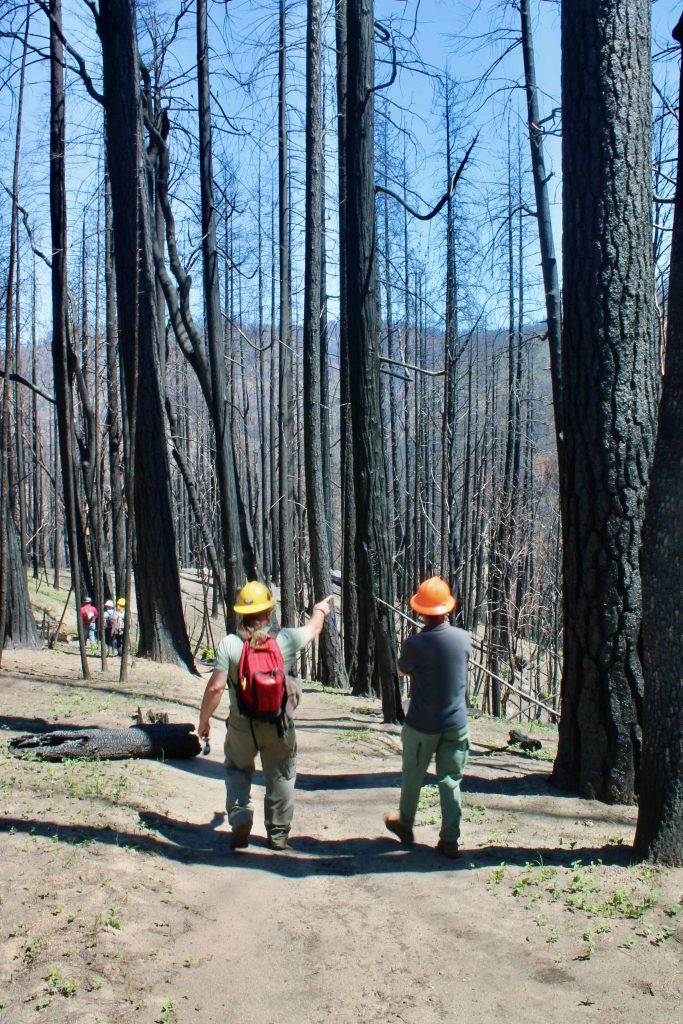 CalWild attended a tour by the Forest Service outlining their plans for restoration of the Feather Falls Trail. Photo by Steve Evans.

The first project proposed by the Forest Service to address the damage caused by the North Complex Fire is the Feather Falls Post-Fire Project. The agency is asking for public input on its plan to salvage dead trees from 250 acres of public forest adjacent to the Feather Falls Scenic Area and the Bald Rock Inventoried Roadless Area. The project also calls for the restoration of the damaged Feather Falls Trailhead, parking lot, and campground. In addition, the Forest Service is proposing to remove dead and dying trees along 7.3 miles of the popular Feather Falls National Recreation Trail in the Scenic Area and IRA. Large trees will be removed by helicopter and smaller trees and debris will be piled and burned. No roads will be constructed in the Scenic Area and IRA, but the temporary use of mechanical equipment is allowed as a necessary emergency response to the public safety hazard posed by the dead trees.

Removing hazard trees along the trail will clear a wide swath on both sides of the trail. The Forest Service is proposing to replant the area along the trail with a mix of native trees suitable to the site. CalWild and its conservation allies are urging the Forest Service to avoid “pines in lines” (the traditional planting method for tree farms) and instead, to plant trees in clumps, based on site microclimate and proximity to water (https://www.fs.usda.gov/treesearch/pubs/58145). Traditional over-stocked tree farms create dense even-age fuels that only increase the severity of future wildfires. The Forest Service is also proposing to establish permanent fire lines in the Scenic Area and IRA to facilitate future prescribed burns to reduce fuels and avoid having to use herbicides. Once the hazard trees are removed, the Forest Service will focus on restoring the trail and the scenic overlook of the 410-foot-high Feather Falls.

Working closely with Friends of Plumas Wilderness, CalWild submitted ten pages of detailed comments in response to the proposed Feather Falls Post-Fire Project. The comments urge the Forest Service to recognize and help restore the special values of the Feather Falls Scenic Area, Feather Falls National Recreation Trail, and Bald Rock IRA. CalWild also urged the agency to assess, avoid, and mitigate potential cumulative impacts on the IRA and Middle Fork Feather Wild River and to fully comply with the Roadless Area Conservation Rule (which prohibits new roads and requires any logging to be done in manner that protects and restores roadless values). In addition, the Forest Service should follow the standards and guidelines in the current Plumas National Forest Resource Management Plan which calls for the protection and restoration of the scenic and primitive recreation values of the Feather Falls Scenic Area.

CalWild’s comments also urged the Forest Service to avoid establishing a linear 7.3-mile-long tree farm along the Feather Falls National Recreation Trail by replanting seedlings in regularly spaced clusters that take into account microsite water availability and potential future fire behavior. Permanent fire control lines should be established so that they don’t detract from the area’s scenic values and no herbicides or pesticides should be used, particularly since oaks, maples, madrones and hardwood are already resprouting in the burn area.

Although we have great faith in the ability of landscapes to eventually restore themselves, CalWild believes that doing nothing in this area is not an option. Currently, the Feather Falls Trail is closed to the public due to the hazard trees. Eventually, the dead and dying trees will collapse and cover the trail, making it difficult if not impossible to hike to the Falls. We believe if done with care, the Feather Falls Post-Fire Project will help with natural restoration of the area and allow people to enjoy its scenic and recreation values as it recovers.

The Feather Falls area is not the only wild place on public lands that has been adversely affected by increasingly large and destructive wildfires. The 2020 fires impacted areas and rivers proposed in legislation or various agency planning processes by CalWild for wilderness and wild and scenic river protection in the San Gabriel Mountains, Sierra Nevada, and in Northwest California.

More than 100 years of fire suppression, past commercial logging that removed the older fire-resistant trees and replaced them with dense tree plantations, and climate change-induced drought have all contributed to the problem. The impacts of these fires have finally prompted the public, government agencies, and elected officials to recognize the need for returning fire to its natural ecological role on our public lands. We must also recognize that wild places can benefit from ecology-based restoration that works with nature and avoids punching roads and developing roadless areas.

For a copy of CalWild’s comments on the Feather Falls Post-Fire Project, click here. For more information about this project and CalWild’s response to it, contact Steve Evans, CalWild Rivers Director, email: sevans@calwild.org, phone: (916) 708-3155.

All stories by: CalWild
30×30: California’s Reckoning with Environmental Resilience and Social Equity
Watch our fly-over of the San Gabriel Mountains