The Story of the Elkhorn Ridge Wilderness

The 11,001-acre Elkhorn Ridge Wilderness is in Mendocino County between Highway 101 on the north and the University of California’s 7,660-acre Heath and Marjorie Angelo Coast Range Reserve (a U.C. Berkeley-administered research reserve) on the south. This patch of BLM land is almost 6 miles long from north to south and 5.4 miles wide from east to west. It is bisected by the Wild and Scenic South Fork Eel River that flows for nearly 6.6 miles through the area. The Elkhorn Ridge Wilderness contains rugged slopes covered with thick forests of redwood, Douglas-fir, and tan oak. Old-growth groves are scattered throughout the area. Chaparral communities are found mainly on south-facing slopes and ridgetops. Currently there are no established trails in the area and access is difficult. The best access is along the South Fork Eel where whitewater boaters can float through the heart of the area. The river offers class IV-V whitewater boating opportunities. 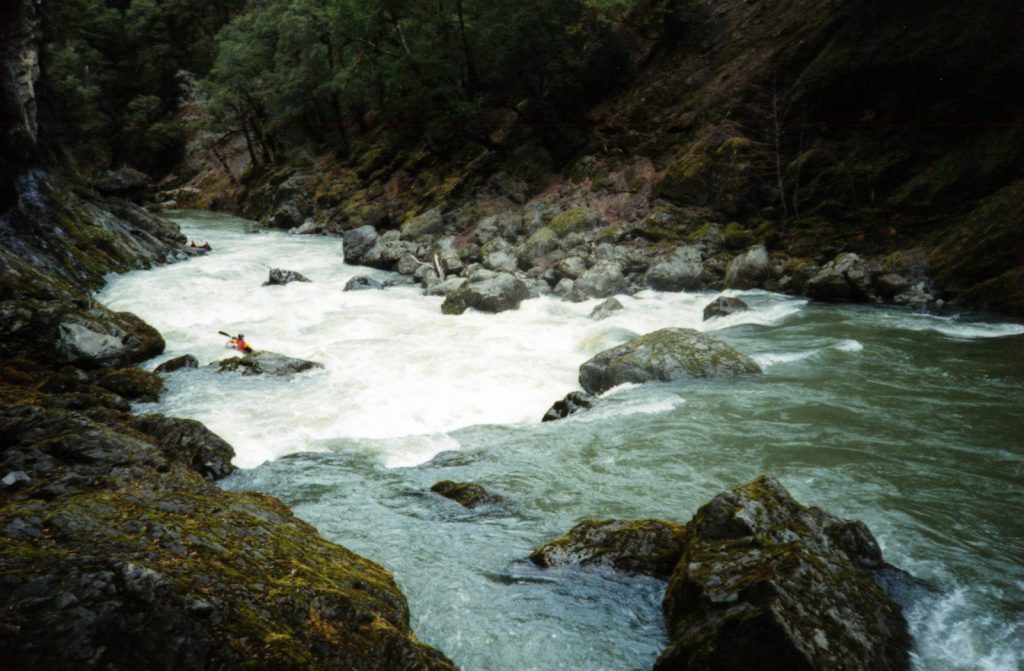 Elkhorn Ridge had scattered private industrial timber lands mixed in with BLM ownership until the 1970s. Roughly 2,200 acres of these private lands were logged in the 1960s before being acquired by the BLM. The logging was scattered throughout the area in small blocks rather than being concentrated in one location. As a result, the logging resulted in a significant amount of widely dispersed road construction. The timber company also engaged in some gravel mining along the South Fork Eel River. By the late 1970s the BLM had acquired its current block of ownership. The logging roads were allowed to deteriorate and were never open to the public or used by BLM for administrative purposes.

The Federal Land Policy Management Act of 1976 required the BLM to identify tracts of agency land that met the definition of wilderness. These tracts were known as “wilderness study areas” (WSA). During the BLM’s process of identifying possible WSAs in the 1970s, conservation groups and local residents urged the agency to identify Elkhorn Ridge as a WSA. The agency refused, citing the logging, road construction, and gravel mining that had occurred on the formerly private lands. The agency also expressed the sentiment that the area’s timber should be logged for the benefit of industry. Conservationists appealed this decision to the Interior Board of Land Appeals, but the challenge was denied. A lawsuit against the BLM also failed.

Despite this designation, the BLM proposed to log and construct new roads in Elkhorn Ridge in the 1980s. Local residents and conservation groups strongly opposed the logging, even to the point of physically blocking logging efforts in 1988. Several anti-logging protesters (most of whom were local residents) were even arrested during what became known as the “Elkhorn Ridge blockade.” Lawsuits were also filed against the agency. As a result of this resistance the BLM never logged its holdings, nor did it construct any new roads.

Protections for Elkhorn Ridge were significantly increased with the approval of the Northwest Forest Plan in 1994 followed by the approval of the Arcata Field Office’s Resource Management Plan in 1995 that designated Elkhorn Ridge as a Late-Successional Reserve for the management of habitat for the northern spotted owl, steelhead trout, salmon, and other sensitive species. Throughout the rest of the 1990s the BLM managed the area to protect old-growth forest habitat.

The California Wilderness Coalition (CalWild) surveyed the area in 2001 and determined that it had wilderness character because the old roads had been abandoned since the 1960s and the patches of cut forest were difficult to distinguish from natural, un-logged stands or chaparral from the air. The areas mined for gravel along the South Fork Eel had become small ponds lined with riparian vegetation. CalWild worked with adjacent landowners (many of whom had engaged in the anti-logging protests) to bring the area to the attention of legislators.

CalWild consulted with the BLM’s Arcata Field Office in 2001 about the wilderness proposal and agency staff expressed concerns that the area did not have wilderness qualities because of the logging, road construction, and mining that had occurred in the 1960s. As a result of the BLM’s concerns, the area was first included in legislation in 2002 as a “potential wilderness” by Senator Barbara Boxer and Representative Mike Thompson. The area was proposed as a potential wilderness to give the BLM time to assess restoration needs in the area and conduct any necessary remediation. The legislation stated that the “area shall be designated as wilderness and as a component of the National Wilderness Preservation System, on the earlier of–(1) the date on which the Secretary publishes in the Federal Register notice that the conditions in the potential wilderness area that are incompatible with the Wilderness Act (16 U.S.C. 1131 et seq.) have been removed; or (2) the date that is 5 years after the date of enactment of this Act.”

The Mendocino County Board of Supervisors voted to endorse wilderness protection for the area in 2003. The local Cahto Tribe also endorsed wilderness protection for Elkhorn Ridge, as did Harwood Industries, a timber company with extensive ownership in the region. Public support for protecting Elkhorn Ridge was overwhelming and continued to grow between 2003 and 2006.

The BLM testified in a U.S. Senate hearing in 2004 that the area ought to be designated as a WSA instead of potential wilderness so that its wilderness potential could be assessed. Conservationists opposed this proposal, arguing that the area had recovered sufficiently to become wilderness. The legislation remained unchanged despite the BLM’s concerns.

The potential wilderness language became law as part of Senator Boxer’s and Representative Thompson’s Northern California Coastal Wild Heritage Wilderness Act (Public Law 109-362) in 2006. After the bill passed the BLM carefully assessed Elkhorn Ridge from the air and in the field and determined that the land had sufficiently recovered from the 1960s-era logging, mining, and road construction such that it did not require any active restoration. As a result, the agency published a notice in the Federal Register on January 13, 2011 declaring that “The Secretary of the Interior has determined that the conditions of the Elkhorn Ridge Potential Wilderness Area that were incompatible have been removed, and therefore the area is now suitable for wilderness designation.” The area therefore became the Elkhorn Ridge Wilderness.

Today, conservationists would like there to be better access to Elkhorn Ridge Wilderness for the public. One goal is for a trail to be established along the South Fork Eel connecting an access point from Highway 101 in the north to the U.C. Reserve in the south. The BLM recently acquired lands linking the Elkhorn Ridge Wilderness to a road in the north. This raises the possibility of establishing a trailhead and eventual north-south trail through the area.

All stories by: CalWild
Statement of Support for Black Lives Matter
IN MEMORIAM: Hall Newbegin