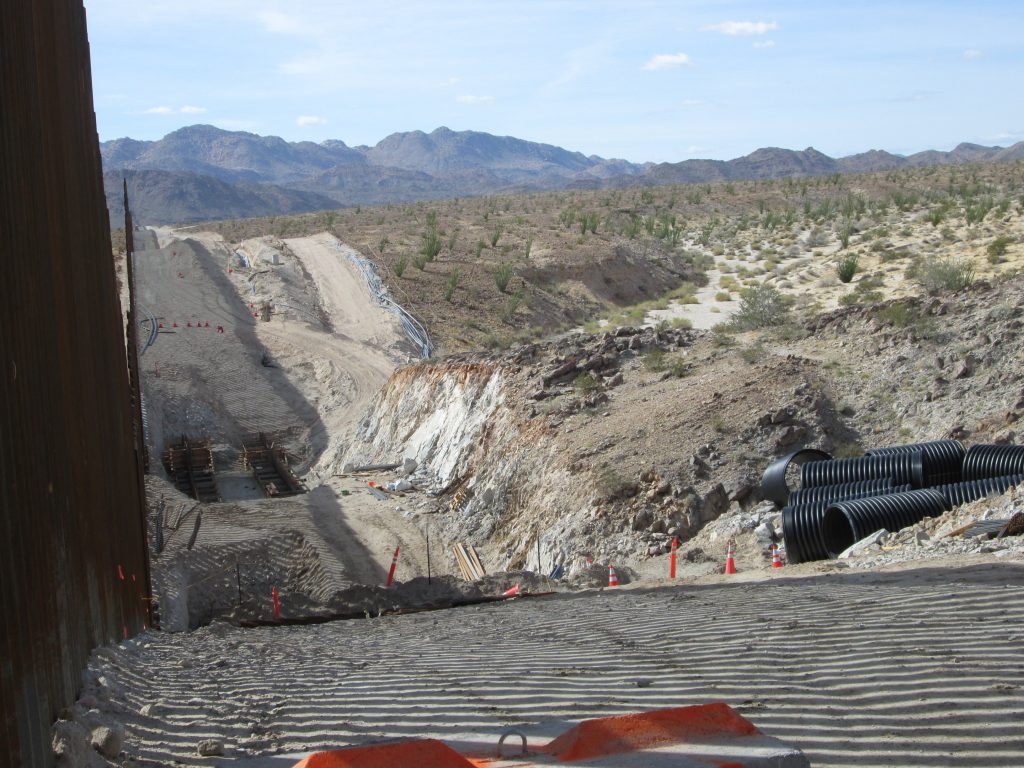 Crisis in the Jacumba Wilderness 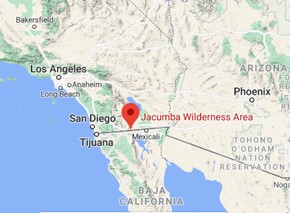 The Jacumba Wilderness consists of 31,357 acres of beautiful desert washes, mountains, and canyons in southern California, located on the Mexican border, about a two hour drive east of San Diego. Established by Congress in 1994 and managed by the BLM, the wilderness is a functioning ecosystem home to federally endangered peninsular bighorn sheep as well as mule deer, golden eagles, jackrabbits, flat-tailed horned lizards, ocotillos, California fan palms, and many other species. It is also part of the native Kumeyaay people’s ancestral land and still holds great importance for them. The area is largely rugged and mountainous, although it has two wide valleys that extend right to the border: the larger Davies Valley in the center and the smaller Skull Valley further east.

As part of its February 2019 “emergency” push to secure the southern border, the Trump administration decided to build a wall across these two valleys. To expedite the process, it waived all applicable environmental protection laws, over 30 in total. Legally, “wilderness” is to be protected in its natural state in perpetuity, with no vehicles, motorized equipment, structures, or roads allowed (even temporarily), but all of those soon materialized. The Army Corps of Engineers contracted out the job to Barnard Construction Company, with Martell Electric as a subcontractor, and work began in May 2019.

Over the following months, Jacumba’s sensitive desert ecosystem suffered severe damage. Miles of paved road were built through the wilderness into Skull Valley, all the way to the border. Many dozens of tire tracks were cut across both valleys, a wide track was gouged through the ground parallel to the wall, hundreds of fragile plants were flattened or flung aside, and key drainages were blocked by berms and massive sand piles. Seven wells were drilled with at least one reaching the area’s sole potable aquifer, and the water used to mix concrete and tamp down dust. The metal bollards of the wall itself are now up, but most of the accompanying works are incomplete, including culverts, pipelines, and electrical surveillance posts.

President Joe Biden’s January 20th Executive Order paused all border wall projects for a review and a decision within 60 days on whether to proceed, modify, or abandon them. However, we have eyewitness accounts and photographic evidence from numerous occasions that construction activity has indeed been continuing since then. Local resident Edie Harmon, who has lived just outside of the wilderness boundary for over 40 years and often hikes in to the border has documented much of the damage. While construction was underway during the Trump administration, the public was only allowed access on Sundays. That rule has been dropped under Biden, and she now ventures in more frequently to document all aspects of the construction’s impact. On multiple weekdays, she documented excavators in action as well as other heavy machinery moving around. Security guards stationed there have also gladly shared insights with her; for example, they said that the on-site review was completed soon after January 20th, which begs the question of what exactly has been going on since then. 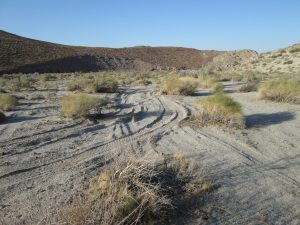 Tire tracks cutting across Davies Valley with dead vegetation in the foreground. Photo by Edie Harmon

Meanwhile, off-road vehicle use by the Border Patrol continues, cutting dozens of tire tracks in what should be a pristine, untouched wilderness. Fresh tire tracks are clearly visible going through lamb-rearing habitat for the endangered bighorn sheep population. Furthermore, the Border Patrol’s off-roading seems to be encouraging a free-for-all for contractors and joyriders to drive anywhere they please in the wilderness.

In some cases, fragile plants like ocotillos, agaves, and barrel cacti have been run over. There are numerous parallel tracks to the north-south paved road, and Harmon recently documented 51 east-west ones branching off it – many used only once. The Jacumba Wilderness is critical habitat for endangered bighorn sheep, which the security guards see crossing the paved road several times per day.

As for the wall itself, its concrete foundation is already showing signs of erosion and poor drainage. The wide track carved out alongside it is in even worse shape, with cavernous drops that make parts of it impassable for vehicles and potentially unsafe even for workers to access at present. The threats of erosion and structural damage are highest in winter, when the area experiences occasional heavy rains and flash floods. In short, the wall would need perpetual maintenance in its current form. And all the while, eye-level berms and massive piles of construction sand have blocked the natural drainages that crisscross the border. This means, for example, that the crucifixion thorn will remain cut off from their vital water source without corrective action.

Priority Areas to Remediate the Damage 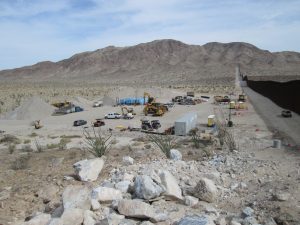 Cleared staging area by the border wall in Skull Valley, with sand piles in the background Photo by Edie Harmon

Remediation may require a separate project with federal funding, but these steps need to start ASAP before more damage is done. Heavy machinery is needed to fix the sweeping damage that has been done, and to erase all signs of human and vehicle activity (except the completed wall itself). The miles of berms, for example, have been coated with Soiltac and are rock hard; individuals cannot feasibly remove them with shovels. The paved road must be removed from the wilderness. A major re-vegetation effort is needed, and the Border Patrol claims to have thousands of native plants in a nearby facility earmarked for this. The miles of water pipelines, electrical cables, and all other unused construction materials ¬– as well as the accumulated trash and piles of bulldozed vegetation – need to be cleared out, too.

All stories by: CalWild
EVENT: Stand By Your Lands – Northwestern CA, May 26
Catfish Lake