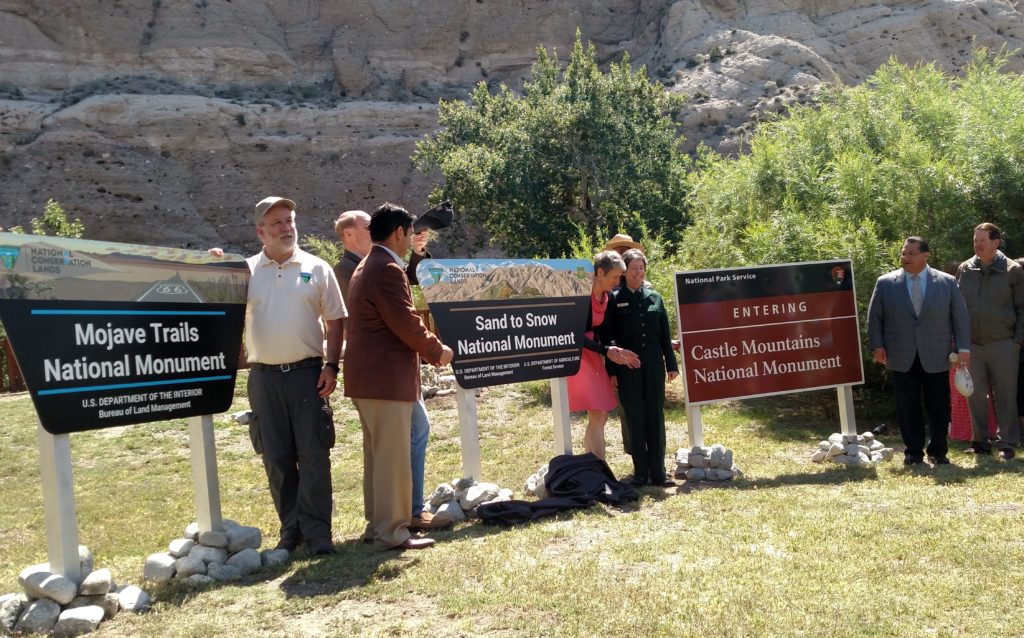 CalWild staff joined hundreds of people at Whitewater Preserve near Palm Springs on May 5th to celebrate President Obama’s recent designation of three national monuments in the California desert – Mojave Trails, Sand to Snow, and Castle Mountains. CalWild, along with other conservationists and stakeholders, have worked for years to protect these lands and this celebration was an emotional culmination to that work. Senator Dianne Feinstein, who worked for about a decade to seek a higher level of protection for these lands without success, asked President Obama to use his authority under the Antiquities Act to designate the lands as monuments.

Secretary Sally Jewell discussed the importance of the new monuments, choking back tears several times during her comments, by saying, “It’s so important that we work together to protect special places – not just now, not just for our children and grandchildren, but forever.  That’s what’s been done here.” She appeared to take great pleasure in informing the crowd that the monuments help create an unbroken corridor of protected lands from the Angeles National Forest to the Nevada border. Congressman Raul Ruiz expressed his love for the California desert and praised the diverse groups that worked to protect these monuments, noting that their work would be forever memorialized.

The event was heavily covered by local, regional, and even national news outlets. Click  to read more from KESQ, The Press Enterprise, Route 66 News, The Wilderness Society, or watch the Desert Sun’s terrific video of the day’s events.