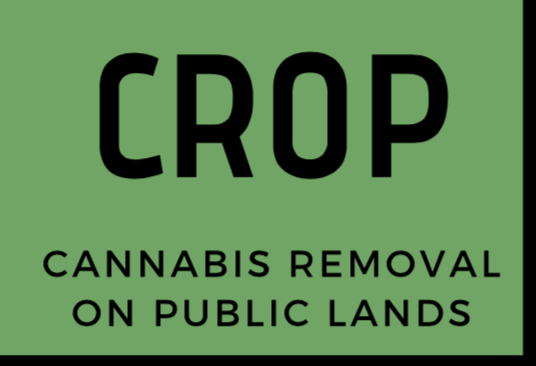 Regardless of one’s personal beliefs about marijuana, almost everyone agrees that it should not be grown in our National Forests, National Parks, and other public lands where it is not only illegal, but extremely destructive. But sadly, illegal marijuana cultivation is occurring across a significant swath of federal public lands in California, and it is having increasingly horrendous impacts on water quality and wildlife. CalWild has launched a new collaborative project to tackle the problem: Cannabis Removal On Public Lands, or CROP.

Marijuana on federal public lands in California is grown primarily by foreign drug cartels. The problem exploded after September 11, 2001 when it became easier to grow marijuana in the U.S. on public lands than it was to grow it outside the country and smuggle it across our newly-tightened borders. Since the problem is international in nature, recent changes to California’s marijuana laws have not solved the problem as many had hoped.

Drug trafficking organizations (DTO) plant more marijuana on public lands than they need with the expectation that some of it will be discovered by law enforcement. Each grow is therefore often a network of multiple patches, carefully concealed from the air. Thousands of pounds of supplies and equipment are brought in to each grow site, usually carried downhill from a road (most sites are within a half-mile of a road). Dams, ponds, and ditches are constructed to divert water and thousands of feet of plastic pipe are installed to distribute the water. Herbicides, pesticides and fertilizers are used liberally, and are often mixed directly into these ponds and ditches. Rat poison is scattered throughout the area to kill any animal attempting to eat the pot. The grow sites are then occupied for 3-6 months.

At the end of the growing season, only weapons and the processed marijuana are removed. The grow sites remain tainted by toxic chemicals, mounds of garbage, human waste, propane and other fuels, the corpses of poisoned animals, the remains of illegally-hunted wildlife, and other pollutants that are simply left behind. Stream diversions and the plastic piping is also left in place. Adding insult to injury, most sites are brazenly reused by the DTOs.

When sites are discovered by law enforcement, the marijuana and weapons are removed but most everything else is left behind. There is a long backlog of marijuana grow sites that require a thorough cleanup and restoration. The California Council of Land Trusts estimates that there are roughly 50,000 cultivation sites spanning the state — an estimate that many experts believe to be conservative at best. The Forest Service estimates that only 10% of the sites have had the noxious chemicals removed.

Wildlife sustains the heaviest of casualties because of these trespass grows. Water diversion – as well as the pesticides that seep into rivers and streams – threaten aquatic life, including the endangered steelhead trout and coho salmon. Growers recklessly scatter copious amounts of toxicants around grow sites and do so in ways that are incredibly inviting to wildlife, such as baiting open cans of tuna or poisoning hot dogs, for example. As smaller animals succumb to the tainted and easily accessed food sources, their poison-riddled bodies are consumed by larger predators, and the deadly consequences of these grow sites ripple up the food chain in a devastating cycle. Trace amounts of rodenticide directly linked to illicit grow sites have been found in the carcasses of a variety of animals, from the iconic (and threatened) northern spotted owl to the Pacific fisher and everything in between. Additionally, there is the potential danger of these toxicants making their way into cities and towns dozens of miles downstream via tainted waterways, threatening the lives of all who rely on local streams and rivers for recreation.

Cleaning up the vast backlog of grows is essential both for the health of our water and wildlife but also for public safety. Studies have found that cleaned and fully restored sites are 85% less likely to be reused by drug cartels than are sites where the ditches, pipes, and other infrastructure are left in place.

The primary impediments to cleanup are:

• a lack of financial resources on the part of the Forest Service and other federal agencies;
• the safety challenges involved in removing highly toxic materials; and
• incomplete data on the locations and conditions of the sites.

Another challenge is preventing the grows from occurring in the first place, and this is also plagued by a lack of resources. For example, the million-acre Mendocino National Forest only has two law enforcement rangers. This is typical for California’s eighteen national forests. The Forest Service also has very few aircraft at its disposal, either for patrol or to assist with cleanup. This is important, because helicopters are the primary means used to remove the mountains of waste left behind by the DTO.

To address this monumental problem, CalWild, in partnership with the Community Governance Project, has launched the CROP project. Our goals are to cleanup the vast backlog of abandoned grows and to reduce the growing on public lands to pre-2001 levels. We are accomplishing this by creating a diverse and powerful coalition of interests that will:

• lobby the federal and state governments for more funding and other resources to address cleanup and prevention needs;
• spread and sustain public awareness of the problem; and
• begin a public education campaign about the dangers of smoking marijuana grown under such toxic and destructive conditions.

Partners for CROP include local elected officials from both “blue” and “red” counties, tribes, law enforcement, the regulated marijuana industry, hikers, hunters, anglers and other recreationists, private landowners, water agencies, the timber industry, and anyone else who cares about the problem and is willing to help.

Stay tuned in the months ahead as we develop CROP and begin to address this ecological and public health scourge.