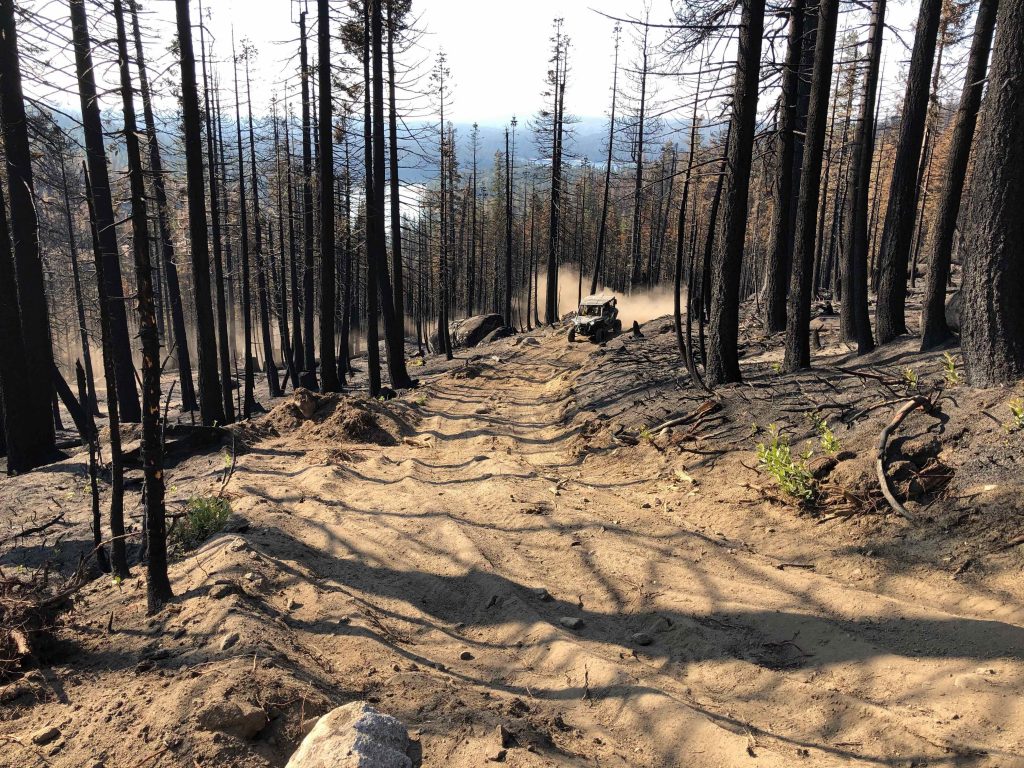 California’s recent “atmospheric river” event has curbed the state’s wildfires…at least for now. Drought and fire weather may return at any time, but 2021 goes down in the history books as producing the 963,309-acre Dixie Fire, the second largest wildfire in state history. Dixie burned extensive areas of the Plumas and Lassen National Forests, and much of Lassen Volcanic National Park. It also destroyed 935 structures, including much of the Plumas County town of Greenville, and caused one death.

As of late October, wildfires in California burned 2,495,889 acres, fueled by more than 100 years of fire suppression on our public lands, logging that increases fire danger over time, and a climate change juggernaut that made 2021 the second driest year and produced the hottest summer temperatures on record. But even though it has finally rained and snowed in California, the 2021 fire season may still not be over.

Wildfires on public lands often result in “all hands on deck” operations for the public land management agencies such as the Forest Service, Bureau of Land Management, and National Park Service. Staff are detailed to work fire incidents and fire crews and managers are often brought in from out of state and even out of country – fire crews on loan from Mexico helped suppress the Dixie Fire.

But the sheer number and size of wildfires in California means that the people who manage and fight fires on a daily basis may not be from the local agency office and may not have the on-the-ground knowledge and expertise to focus on minimizing damage to the forest environment while fighting the fire. Local resource advisors, known as READS, provide professional knowledge and expertise for the protection of natural, cultural, and special management areas during wildfires. They are responsible for identifying and evaluating potential effects resulting from the fire incident and incident response on natural, cultural, wilderness, and other resources.

At the height of the Dixie Fire, Darrel Jury from Friends of Plumas Wilderness received disturbing first-hand accounts from resource advisors and other local National Forest personnel that the effort to fight the fire had led to destructive and unnecessary bulldozer lines constructed in the Bucks Lake Wilderness. Established in 1984, this relatively small 21,000-acre wilderness was previously threatened by 2020’s giant North Fire, but this year’s Dixie Fire burned more than two-thirds of the wilderness. What Darrel heard was that many of the bulldozed fire lines in the Bucks Lake Wilderness were either unnecessary or ineffective. In fact, a fire line hand-grubbed by a fire crew contributed to halting the fire in the wilderness. 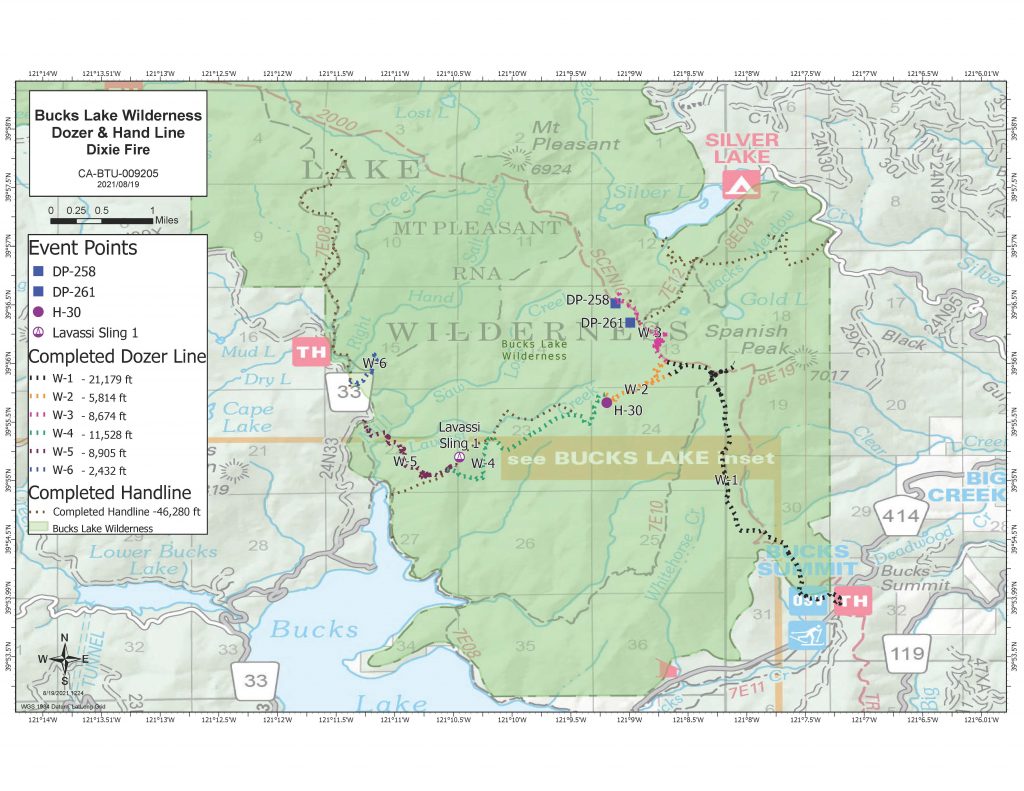 Wilderness advocates accept the need to use all tools necessary to fight fires in wilderness, including using chain saws, bulldozers, back-fires, and retardant drops by aircraft. In fact, the 1964 Wilderness Act guarantees that all measures may be taken as necessary to control fire, insects, and diseases to protect public health and safety, subject to conditions imposed by the Agriculture (Forest Service) and Interior (BLM, NPS) Secretaries. As a result, permission to bulldoze lines in National Forest wilderness is required from the Regional Forester, and this permission is routinely granted.

But what if fire managers from different regions and offices ignore the advice of their local resource advisors? The result may be what we now see in the Bucks Lake Wilderness – more than 11 miles of bulldozed fire lines in the southern portion of the wilderness.

More than 5.6 miles of lines were bulldozed in the wilderness parallel to and, in some places, on top of the Pacific Crest National Scenic Trail. Nearly a half mile of dozer line was punched into the Mt. Pleasant Research Natural Area, which was established within the wilderness to facilitate research on untouched old growth red fir forests and peat bogs. Another 8.6 miles of fire line were constructed by hand. According to Friends of Plumas Wilderness, about 71% of the hand lines and only 14% of the dozer lines proved effective in limiting the spread of Dixie Fire in the Bucks Lake Wilderness. More concerning, local resource advisors claim that the dozers in the Bucks Lake Wilderness “never should have happened in the first place.” 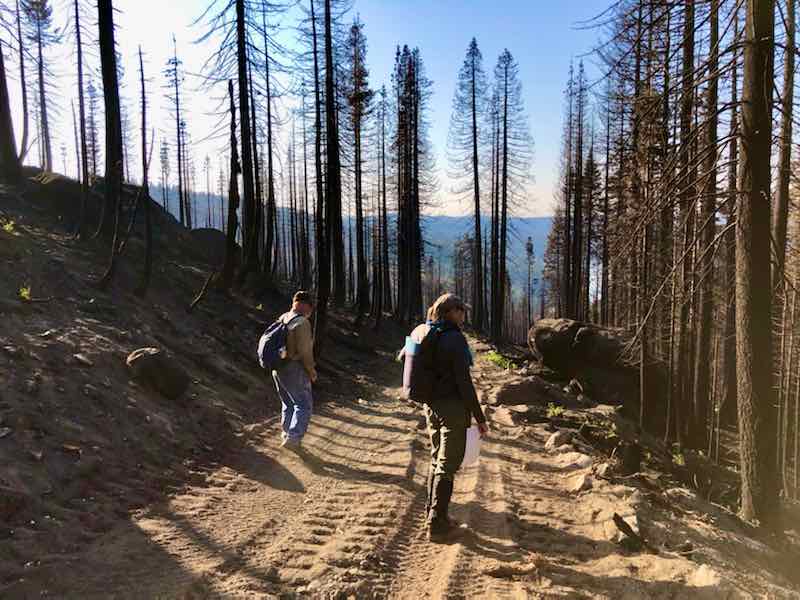 Even more disturbing is the fact that overuse of bulldozers and failure to use minimal impact suppression techniques in wilderness is occurring in other sensitive wild places. According to Amanda Barragar, a resident of Trinity County who provides community outreach in support of the Northwest California Mountains and Rivers campaign, local resource advisors objected to the “heavy-handed” response to the Monument and River Complex Fires in the Trinity Alps Wilderness this summer, resulting in “unnecessary fire suppression impacts to wilderness.” The damage includes bulldozed wilderness trails and cutting down of many large trailside trees.

The damage is occurring to potential wilderness areas as well. Unneeded dozer lines were constructed in the Pattison Roadless Area, which was also threatened by the Monument Fire. The area is proposed for wilderness in legislation that has already passed the House and is pending in the Senate. Last winter, CalWild and EcoFlight flew over the Forest Service-recommended 42,000-acre Castaic Wilderness in Los Angeles County. What they found were several ridgetop fire lines bulldozed on top of parallel and adjacent ridge tops (when one strategically placed fire line would have worked).

CalWild and its allies raised the issue of unnecessary and damaging bulldozer use in wilderness at a recent meeting with Regional Forester, Jennifer Eberlien, and her leadership team for Forest Service Region 5 (which includes most of California). In response, Forest Service officials are looking into the management of these fires and a follow-up meeting has been scheduled with the Region 5 coordinator for Wilderness and Wild and Scenic Rivers.

CalWild and other conservationists recognize that “things will happen” in the heat of the moment fighting California’s increasingly larger and more severe wildfires. Because of the emergency nature of fighting fire, CalWild advocates for pre-fire preparation, including the development of fire management plans for all wilderness areas that explicitly determines the minimal impact tools used to fight the fire, where fire lines will be placed (if needed), and the feasibility and desirability of pre-fire fuels reduction through hand thinning and prescribed fire. This would add more certainty and protection for our state’s wild places.

Our outstanding wild places are not simply helpless targets for wildfires. With pre-planning and cooperation, fuels can be treated and wildfire impacts can be reduced. In 2019, the Forest Service implemented the Caples Ecological Restoration Project with the support of a local water agency and conservationists. The project included hand-treatment of fuels within the Forest Service recommended Caples Creek Wilderness on the Eldorado National Forest, while protecting the wilderness values of the area. This summer’s Caldor Fire generally burned around the treated area.