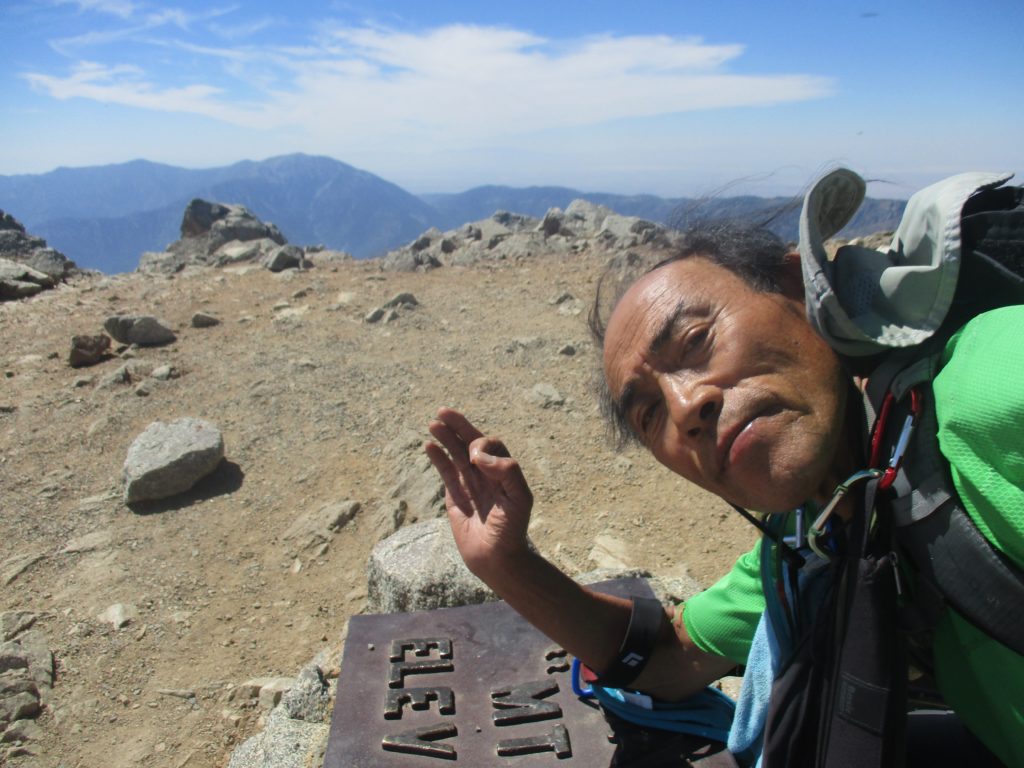 A mountain that begs 1,000 summits

The hiker – 79 years old, a sun-beaten face, wrinkled, yet full of joy – let out a deep sigh, stretching his arm out across the dusky expanses of the Baldy Bowl. Just over the mountains, the sun could be seen setting, its red and orange rays fading beneath the dark, looming visage of the western face of Mount Baldy.

“Look at all this. Better than church, better than medicine. Every time I come here, God – God embrace me!”

Smiling, he stood, his silhouette illuminated by the setting sun, his image forever imprinted in the minds of those who knew him.

This hiker was Seuk Doo “Sam” Kim, a Korean-American man from Culver City who was only one of many to feel the embrace of one of Los Angeles County’s many hidden gems. He had planned to hike the peak 1,000 times, a monumental goal for anyone at any age, much less his. A well-known figure in the hiking community, he, by a conservative estimate, was at 800 summits at the time of his last and fatal hike in April 2017. 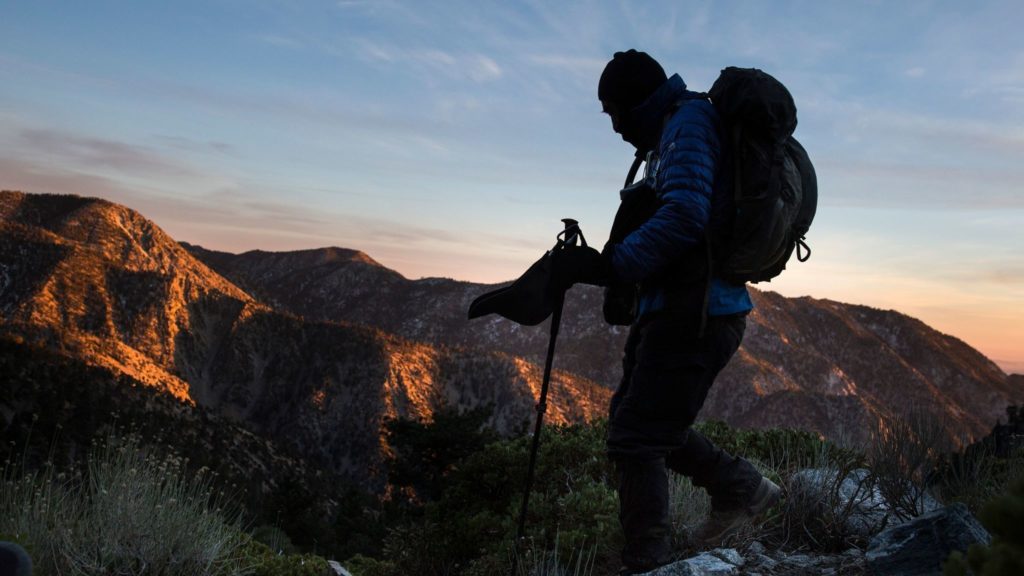 At his peak, Sam routinely hiked to the summit every day, no matter the conditions – day, night, rain, shine, snow – and every day, hikers would learn to recognize him and his generous, enthusiastic persona. At one point, Sam was interviewed by the Los Angeles Times, who were eager to talk to him about his hiking obsession and his goal to reach 1,000 summits. Being the vibrant soul he was, Sam agreed, dragging along the reporter and cameraman up 4,000 vertical feet to the cold, windblown summit.

This peak, Mount Baldy – known formally as Mount San Antonio – is 10,064 feet high, standing as the tallest in Los Angeles County and third-tallest in Southern California. Although the peak is most well-known to L.A. denizens for its seasonal ski resort, its real appeal lies in the trails on the mountain itself, of which there are many. Of course, all of the trails leading up to the summit are, indeed, notorious for their treacherous conditions during the winter, with the peak having claimed multiple lives this year alone. And still, despite these dangers, hikers continue on, drawn by the stunning allure of this imposing, long-standing peak.

Sam himself was one of these hikers, with his trail of choice being the Baldy Bowl Trail, a steep, strenuous trail that winds its way up the south face of Mount Baldy. The trail itself is an 8 mile round-trip, 4-8 hour hike that climbs 4083 feet in elevation to the summit. Starting with a half-mile asphalt road and making a turn around the Mount Baldy fire road, the trail wanders through spectacular territory, winding its way up around desert shrubs and deep evergreen trees to give a clear view of the valley above which it rests.

The trail, which can be quite narrow at times, leads up to the iconic green visage of the San Antonio Ski Hut, an overnight cabin managed by the Sierra Club first built (and since rebuilt after a fire) in 1936. The trail then crosses the San Antonio Creek and navigates its way through the boulder-littered bottom of the Baldy Bowl, where, after a steep ridge, it cuts up a set of switchbacks to a gentle path that offers spectaculars vistas of the tree covered plains below. Only a strenuous, quarter mile push remains up to the face of Mount Baldy – and then, as with each and every hike, the equally-as-long way down.

As Sam began to near 800 summits, his fervor for hiking increased tenfold – and with his 80th birthday soon approaching, he laid out a plan that would require him to hike the summit over 200 times in one year. Throwing all caution to the wind, he embarked on what would be the final leg of his journey, disregarding the weather reports and occasionally camping in his car to get up early for the hike the next day. To a lesser man, this would be pure lunacy. But for Sam? It was merely the fulfillment of a life-long dream.

On April 7, 2017, Sam reached the top of Mount Baldy, looking for another summit to bag in his quest for 1,000. It was late at night and in the midst of a heavy rainfall. In recent months, Sam had grown rather fond of his late night jaunts. It was the usual scene – a few pictures, perhaps a light snack, and then Sam went the wrong way. Perhaps bewildered by hypothermia, perhaps limited by his dark surroundings – whatever the case, Sam, for one of the few times in his life, lost his way, descending down the north side of the mountain rather than the south.

Four days later, Sam’s body was found by search and rescue teams, having fallen over a thousand feet from the summit to the valley below. It was a dream cut short – he was only 13 days away from his 80th birthday, and less than a fifth of the way from his summiting goal. To some, his death was a reaffirmation of the danger of his hiking ways. To many more, his death served as only a reminder of the utter enthusiasm with which Sam went on with his life – and, as follows, an obligation for the rest to carry on that zeal with them. 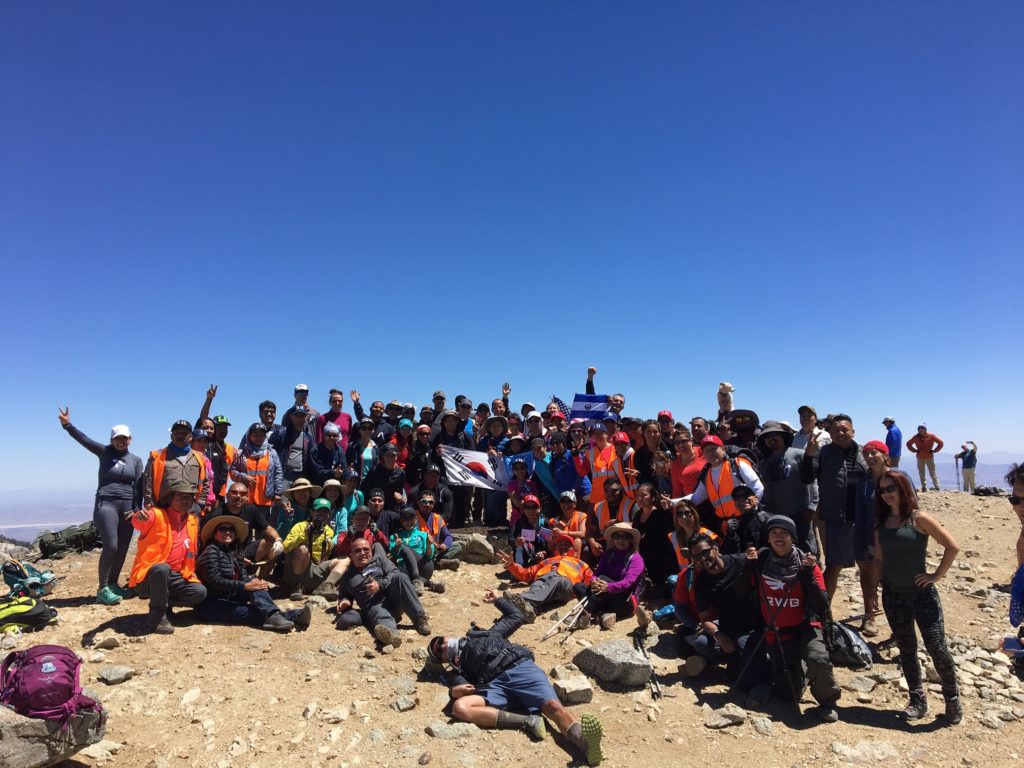 Propelled by this obligation, on May 20, 2017, over 200 members from the hiking group 3H organized a community hike up Mount Baldy. Their goal: to symbolically complete Sam’s dream of 1,000 summits by having 200 people summit the peak for him. At midday, David Kim, Sam’s oldest son, ascended the mountain upon which his father felt so at home. At the summit, members clapped and cheered him on as he graciously accepted a ceremonial postcard. The number written on that postcard: 1,000. 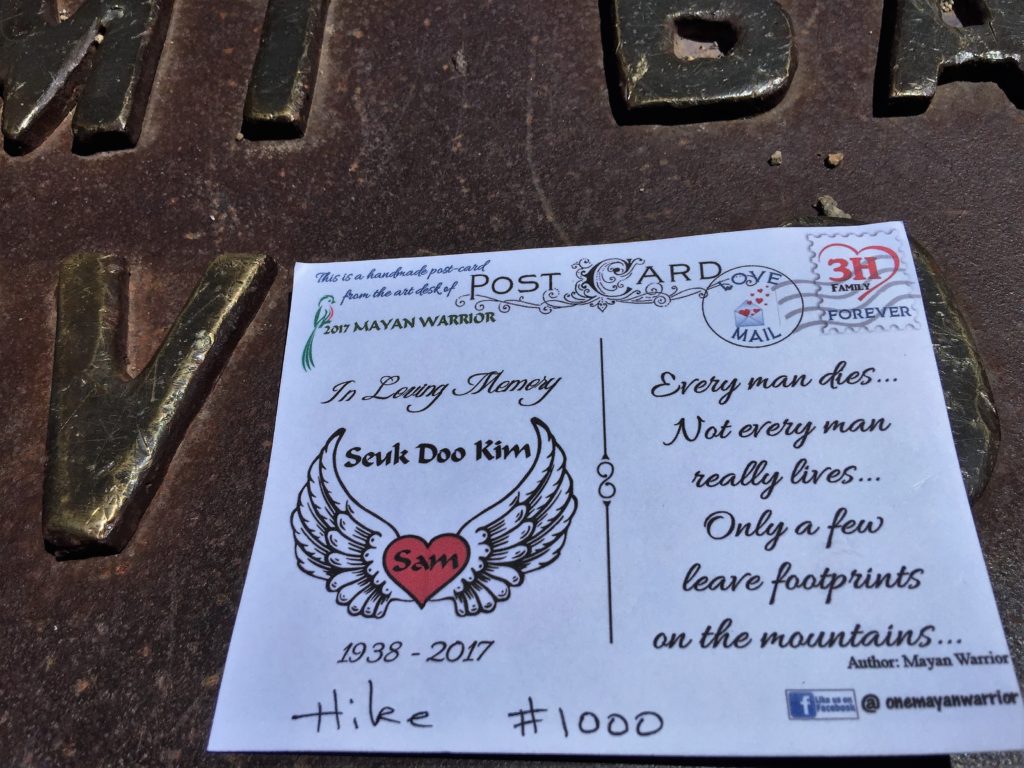 All stories by: CalWild
Canyon View Loop
Stuck on (and in) the Sanhedrin Tract